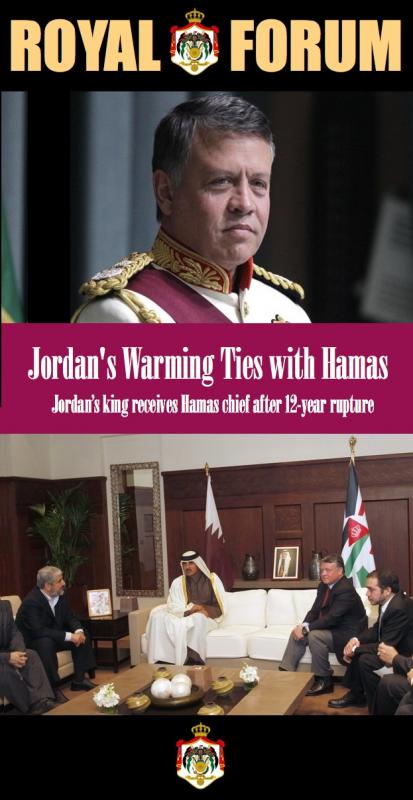 AMMAN, Jordan : A high-profile visit to Jordan by the leader of Hamash as revived contacts with the Palestinian militant group, but Jordan will not lift a ban on its activities there, a senior Jordanian official said Sunday.(See Related BBC News)

Khaled Mashaal’s visit was part of Jordan’s efforts to engage with previously shunned Islamists, who have been gaining ground across the region in Arab Spring uprisings.

Mashaal holds a Jordanian passport, but the kingdom expelled him and four other Hamas leaders in 1999 for “illicit and harmful” activities, forcing Mashaal to set up camp in exile in Syria, from where he has led his group’s political bureau. With the harsh Syrian government crackdown on protesters —including some Palestinians in Syria — Mashaal is looking for a new place to operate.

Re-establishing contact with Hamas also positions Jordan to mediate between Israel and the Palestinians.

IS HAMAS DISTANCING ITSELF FROM SYRIAN INFLUENCE?

Assad refuses to meet with Mashaal :

The majority of Hamas leaders have left Damascus and the tensions between the Palestinian movement and the Syrian regime have reached their peak.  Syrian President Bashar Assad has refused to meet with Hamas politburo chief Khaled Mashaal after the latter called for reforms in Syria following the oppression of opposition protestors. Hezbollah Secretary-General Hassan Nasrallah’s attempts to mediate between the two have been futile.  Hamas’s leaders have left Syria in favor of several countries. Mashaal’s deputy, Moussa Abu Marzouk, reportedly left Damascus for Amman. According to the source, Jordan agreed to take him in under the condition that he avoids engaging in any political activity on its territory.

King Abdullah of Jordan arrived in Ramallah on Monday for a rare visit to the West Bank, as the Palestinians pursue statehood in a region riveted by the slide towards civil war in Syria and mounting unrest in Egypt.

AFP – Hamas chief Khaled Meshaal arrived in Jordan on Sunday on his first official visit since his expulsion in 1999, a trip seen as a turning point in difficult relations between Amman and the Islamist movement.

King Abdullah II is expected to meet Meshaal and Sheikh Tamim and a five-member delegation of the Hamas political bureau, including number two Musa Abu Marzuk, who arrived in Amman on Saturday.

Meshaal, who has Jordanian nationality, “will make a statement to the press before he and the crown prince of Qatar leave Jordan,” added the source.

The palace on Saturday issued a short statement, saying only that Sheikh Tamim will be accompanied by Meshaal on a one-day trip.

A senior Jordanian official called it a “protocol visit.”

“The meeting today (Sunday) is historic. Qatari mediation is supporting the palace’s efforts to reformulate Jordan-Hamas relations in line with national interests,” the Muslim Brotherhood said on its website.

Hamas spokesman in Gaza Sami Abu Zuhri has said the visit seeks to “boost political cooperation, reorganise ties with Jordan and study the means to open a Hamas office in Amman.”

“The trip is also aimed at facing Israeli schemes to abolish Palestinian refugees’ right of return and turn Jordan into a substitute homeland for Palestinians,” Abu Zuhri told AFP on Tuesday.

Jordanian government spokesman Rakan Majali said before the visit “reopening Hamas offices in Amman is not on the agenda. They did not ask for that anyway.”

Domestically, the visit is likely to help improve relations between the regime and Jordan’s Islamists, who have since January last year led an Arab Spring-inspired movement urging sweeping political and economic reforms and an end to corruption.

Jordan, which mediated five rounds of informal Israeli-Palestinian talks this month, is trying to support reconciliation between Palestinian president Mahmud Abbas’s Fatah and the Islamist Hamas, which controls the Gaza Strip.

The kingdom hopes to show that any normalisation of ties with Hamas would not affect its recognition of the Palestinian Authority.

Amman also wants to maintain its relations with Israel under their 1994 peace treaty.

Relations between Hamas and Jordan have been strained since 1999, when the authorities expelled Meshaal and three other Hamas members after the group was accused of threatening the kingdom’s security and stability.

Jordan-Hamas ties soured further in 2006 after Amman alleged that members of the group had smuggled weapons into the kingdom from neighbouring Syria.

Jordanian Prime Minister Awn Khasawneh, a former International Criminal Court judge, said when he formed his government in November that the expulsion of Hamas leaders from Jordan had been “a constitutional and political error.”

Meshaal, who survived a 1997 assassination attempt in Amman by the Israeli intelligence service Mossad, has also made two shorts visits to Jordan since1999 to attend his father’s funeral and see his ailing mother.