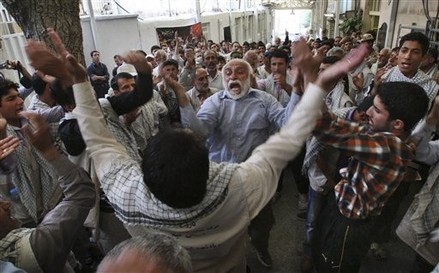 I got it!  I finally discovered the reason why Iranians are so anti-“West.”  Yes you are anti-west–at least 90% of you are.  I laid it out last week.  Anyway, where was I?  Oh, yeah, I found out why you people have such irrational hatred for the West.  It’s envy.  You’re envious little nobodies who so desperately want respect in the world.  You yearn for the days when you had empires and ruled the world.  It’s easy to tell that it’s envy.  Just listen to yourselves.  You can barely contain your excitement about having influence in some hellhole like Ghana or Sudan.  But at the same time, you criticize the “West” for having influence in a place that someone actually gives a shit about, like Saudi Arabia.

The majority of the Iranian society—inside and outside Iran– today is a Frankenstein combination of wondering nationalists, uber religio-supremacists, leftover 1960’s and 70’s leftists and conspiracy theory freaks, with a dash of anti-Semitism mixed in—just enough to make themselves believe that pushing the Jews into the sea may actually be a good thing.  So, what do they do to compensate for their lack of an empire to brag about?  They yell at the biggest empire on the block—the one that they believe has taken their rightful place as the boss of the world: the U.S.!

But you’re not going to get respect by climbing embassy walls and taking hikers hostage.  So, let me give you a couple of pieces of advice.  It will help you in your quest to regain your lost glory.

1.  Know your place in the world.  And stop it already: you are not the children of Koorosh and Daryush.  In fact, if those guys were alive today, they would probably shit their collective pants after seeing what a bunch of Imam Hussain chest beating, embassy wall climbing fanatics you have become.  And then they will get on their horses and get as far away from you Islamo-communist freaks as they can.

For the most parts, you are the children of this guy.  I hate to break it to you, but your culture for the past 600 years has been the product of Majlesi’s teachings.  He created the modern Iranian clusterfuck of Shia culture.  Pretty much every social ritual that you go through today is the handy work of this opium smoking, wine drinking (possible little boy fucking?) akhoond.  Sorry, but it’s true.  So, again, know your place in the world and know who you are.

2.  If you want to be an imperialist, you have to start small.  Baby steps people- baby steps! The first step to being an imperialist is to be industrious.  Americans didn’t get where they are today by reading poetry and beating their chests on Ashura.  This is not an “irfani” world.  It’s a dog eat dog world.  People don’t respect you for your ability to recite poetry.  They respect you when they see your aircraft carrier.  So now, put down any—or all—of the following items that you may be holding: divan-e-Hafez, sikh-e-kabab, aftabeh, The Communist Manifesto or nahj-ol-balagheh.  Did you put it (them) down?  Good!  Now go grab a hammer and start building something.  Build a chair.  We can start with a chair and work our way up to one of these.

3.  Enough with the afternoon siesta already.  To be an imperialist, you need to be alert and work a little bit so that you can do things that I described in number 2.  The current imperialists work two jobs and average 8-10 hours a day. They have a half hour lunch break and if they get sick, they take a couple of industrial strength pills and come to work anyway.  And they’re lucky if they get one week of vacation a year.  You need to do the same.  No driving home in the middle of the day for ghormeh sabzi and an afternoon nap.  Stay at work and keep building chairs (see number 2 above).  And no more month long vacations and trips to Dubai either.  One week is enough.

Trust me folks.  If you follow my recommendations, you will be an imperialist in no time, and by no time I mean a hundred years or so.  Because, let’s be realistic here. It’s going to take a long time to get from this to this.