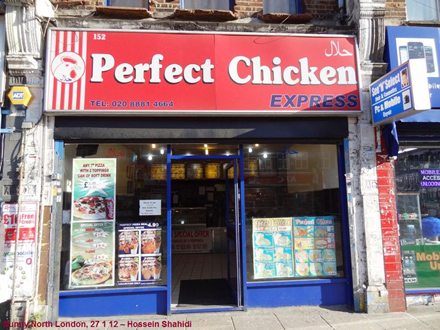 Last week we had been warned that very cold weather, along with snow and hail, was on its way here in London. On average, London gets around 1,400 hours of sunshine every year, about one-third of the maximum possible. Sunny days are even rarer during winter. Friday, 27 January, though was predicted to be sunny, and so it was – a rare opportunity to go around the city and see people and places in colors other than shades of grey.[see photo essay]

Walking, or travelling on the top floor of a double-decker bus, you can see more details than when you’re in a car. It is also fun to walk in a city where pedestrians sometimes have more rights than drivers and can stop the traffic to cross the road, either by turning on special lights, or by simply stepping onto ‘zebra crossings’.

The pictures in this photo-essay were taken in three north London districts: Bounds Green; Wood Green; and Muswell Hill. All three are largely residential, with some buildings of historical or architectural significance: churches, cinemas and underground, or ‘tube’, stations. Together, the three districts have some thirty churches, representing 12 different denominations (see list here, http://en.wikipedia.org/wiki/Churches_in_London#Haringey). About three years ago, a survey (http://www.telegraph.co.uk/news/religion/5030049/Britons-are-believers-of-fuzzy-faith-says-survey.html) found that ‘only 12 per cent of Britons feel they “belong” to a church, compared with 52 per cent in France’.

With so few believers and such diversity of faiths, it is no surprise that many churches do not have a big attendance. Some have been converted into or replaced with houses or offices. Others host activities such as social or cultural events or fitness and dance classes. One church in Muswell Hill, dating back to 1902, has been turned into a pub and restaurant. On the other hand, a cinema in Wood Green has been partially turned into a church, serving the black community.

The pictures are of ‘ordinary’ places and ‘ordinary’ people, mainly shopping, given the time of the day – noon to 3pm. The main streets and shopping areas do get more crowded early in the evening and during the weekend. Some churches are also quite busy on Sundays.

Many pictures are self-explanatory. Some background information has been added to others, mostly from Wikipedia. [see photo essay]