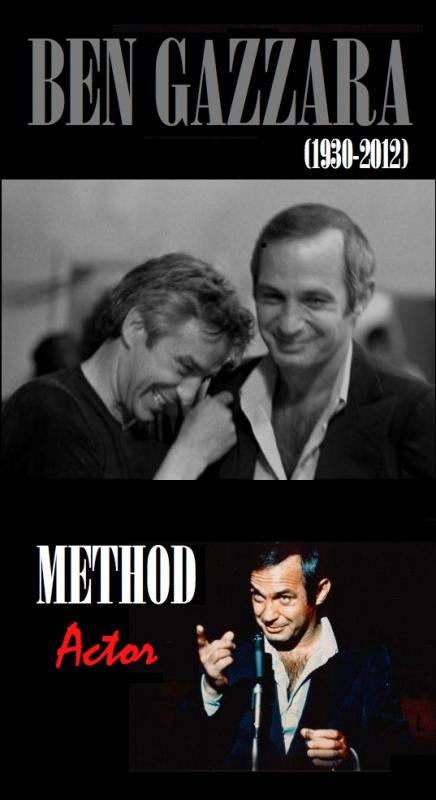 Ben Gazzara an actor with a quiet, brooding intensity who was featured in films and on Broadway and who starred in the 1960s television series “Run for Your Life,” died Feb. 3 in New York City. (Related News)

He was best known for playing tough characters and villains in the films Anatomy of a Murder in 1959 and 1970’s Killing of a Chinese Bookie. Gazzara, who had been suffering from pancreatic cancer, later appeared in cult comedy The Big Lebowski, directed by the Coen Brothers. He began his career in the theatre, starring in the original Broadway production of Cat on a Hot Tin Roof.

In this outtake from a 1978 television interview, Cassavetes discusses his film Opening Night for a while, and builds into a terrific rant on movies and movie audiences. This is a great example of Cassavetes’ way with words, his dislike of people who live only for the approval of others, and his anger at the low popularity of his later films (especially Opening Night and Killing of a Chinese Bookie) None of which was dealt with in the “Constant Forge” documentary that came on the Criterion Collection box set.

Ben Gazzara an actor with a quiet, brooding intensity who was featured in films and on Broadway and who starred in the 1960s television series “Run for Your Life,” died Feb. 3 in New York City. He was 81.

A friend, Suzanne Mados, told the Associated Press that Mr. Gazzara was in hospice care for pancreatic cancer.  As a young actor, Mr. Gazzara possessed a dark, controlled energy that made him an emerging stage star in the 1950s. He originated the role of Brick in Tennessee Williams’s Pulitzer Prize-winning play “Cat on a Hot Tin Roof” and was nominated for a Tony Award for “A Hatful of Rain,” a 1955 drama in which he portrayed a war veteran addicted to drugs.

He had a major role in the 1959 film “Anatomy of a Murder,” playing an Army officer charged with a revenge killing after his wife was allegedly raped. He seemed to be an emerging star, yet he never achieved the same level of fame as two of his classmates at New York’s Actors Studio, Paul Newman and Steve McQueen.

Newman took the role of Brick when “Cat on a Hot Tin Roof” was made into a film in 1958, and McQueen became a star of Hollywood action films. In what he considered an act of professional desperation, Mr. Gazzara turned to television.

From 1965 to 1968, in “Run for Your Life,” he played Paul Bryan, a lawyer with a terminal illness who was determined to pack as much ad­ven­ture into his remaining days as possible. Mr. Gazzara considered the show formulaic, saying, “I could almost do the next show without reading the script,” but “Run for Your Life” has retained a cult following for decades.

On the final day of shooting “Run for Your Life,” Mr. Gazzara ran into actor and director John Cassavetes, who offered him a role in his new movie. The 1970 film, “Husbands,” showcased Mr. Gazzara, Cassavetes and Peter Falk, who died last year, as three perplexed men trying to get over the death of a friend.

In two other films with Cassavetes, Mr. Gazzara played a strip-club owner in “The Killing of a Chinese Bookie” (1976) and a theater director in “Opening Night” (1977). All three films became favorites with a younger generation of moviemakers, who admired the aura of cool toughness that Mr. Gazzara brought to all his roles.

“There’s something so energized and unapologetically male about Ben — he’s a throwback to an American archetype associated with Hemingway,” Sean Penn told the Los Angeles Times in 1998.

Mr. Gazzara continued to appear on Broadway through the 1970s. He earned Tony Award nominations for his roles in 1975 in Eugene O’Neill’s “Hughie” and David Scott Milton’s “Duet,” and he was nominated again in 1976 for a revival of Edward Albee’s “Who’s Afraid of Virginia Woolf?”

He spent much of the 1980s in Italy, where he lived in a villa with his third wife and acted in Italian films. But by the 1990s, Mr. Gazzara found himself in demand by the young directors who admired his earlier work. From 1996 to 1999, Mr. Gazzara appeared in 14 movies, plus several TV movies and miniseries.

Playwright and director David Mamet cast him as a white-collar criminal in “The Spanish Prisoner” (1997). He played a pornography mogul in the cult classic “The Big Lebowski,” directed by Joel and Ethan Coen in 1998. He had the role of the angry father of an ex-convict in Vincent Gallo’s “Buffalo ’66” in 1998 and played a Brooklyn mob boss in Spike Lee’s 1999 film, “Summer of Sam.”

“He never makes anything obvious,” Mamet said in 1998, “and that’s the best thing you can say about an actor.”

Biagio Anthony Gazzara was born Aug. 28, 1930, in New York City. His parents were Sicilian immigrants, and he grew up speaking Italian.

“Immigrant Italians weren’t geared toward literature,” he said in 1998, “so movies were our novels, and I grew up on the best: Cagney, Bogart, Cary Grant, Gable, Wallace Beery — wonderful actors. Then when I was 12, I was in a play at the Boys Club, and once I heard the applause I was sold.”

He studied acting at the New School in New York and later at the Actors Studio under Lee Strasberg. Besides Newman and McQueen, his classmates included James Dean, Julie Harris and Geraldine Page.

Survivors include his wife of 29 years, Elke Stuckmann Krivat; a daughter from his marriage to Rule, Elizabeth; Krivat’s daughter, Danja, whom he adopted; and a brother.

Mr. Gazzara won an Emmy Award for best supporting actor for the 2002 HBO drama “Hysterical Blindness,” in which he played a widowed suitor of Gena Rowlands. From 2003 to 2005, he toured in a one-man play about baseball star and quipster Yogi Berra.

In his 2004 autobiography, “In the Moment,” Mr. Gazzara admitted to occasional problems with alcohol and depression and that he’d had affairs with many women, including actresses Audrey Hepburn, Eva Gabor and Elaine Stritch.

While making the movie “The Bridge at Remagen” in Czechoslovakia in 1968, Mr. Gazzara said he and actor Robert Vaughn befriended a Czech waitress. When Soviet forces invaded the country, they managed to smuggle her across the border by hiding her in a car.