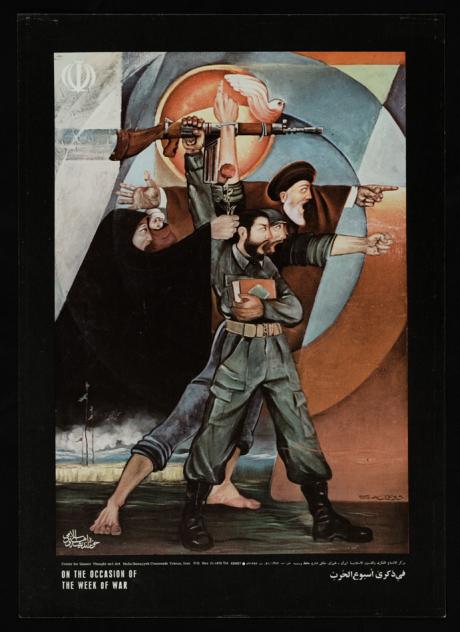 We are all familiar with political art, whether it be war-time state-sponsored propaganda or the work of independent street artists produced during moments of social upheaval. I have always been fascinated with political art because it challenges the famous bohemian concept, “l’art pour l’art” (art for art’s sake). Unlike this 19th century romanticized understanding of art, political art is created for a moral and didactic purpose– it strives to instill feelings of nationalism, patriotism, solidarity, or revolution in order to mobilize society as the artist/distributor sees fit. During the course of my undergraduate study, I stumbled across Iranian revolutionary posters and saw that they were quite distinct from their Russian, Cuban, and German counterparts. I asked myself why certain visual motifs were used endemically in Iran; I came to understand that Iranian artists working during the 1979 Revolution effectively incorporated native symbols of resistance and struggle in order to better communicate with the Iranian populace.

While the tradition of Iranian poster art has its roots in the 1940’s, the circumstances of the 1970’s made the poster one of the most successful vehicles of ideology and revolutionary fervor to the public. Oppositional groups, taking advantage of printing technologies and the processes of modernization, used art as a weapon against the Pahlavi regime and soon bombarded the masses with revolutionary slogans and graphic motifs. During the war with Iraq, state-sanctioned artists weaponized cultural myths of resistance in order to transform the daily experiences of the viewer into elements of mobilizing conviction. Iranian poster art is remarkable not only for drawing upon symbols of resistance and sacrifice from third-worldist liberation movements, but also for incorporating themes deeply situated within traditional Iranian visual culture.