The Unbearable Lightness of Nonviolence 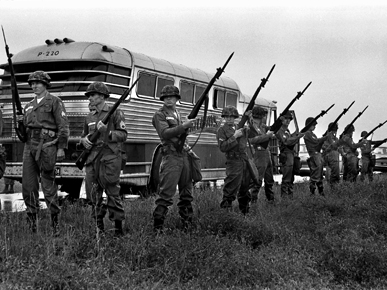 Often people lift nonviolence from what could be a tactical approach that is only effective in certain situations to a universal tactic of opposing tyranny and even a moral requirement for all individuals. But that is a mistake that can sometimes actually embolden the tyrants. Syria is a good example. The first few months the demonstrators against the Assad regime were peaceful. But that only allowed the regime to kill them by the thousands. Now they are finally fighting back. Jews, with the exception of Warsaw uprising, did not fight back against the Nazis and their nonviolence did not prevent the Holocaust. Nonviolence works best when your opponent is a democratic government with a free press. That is why Mahatma Gandhi and Martin Luther King were successful where other nonviolent movements have failed.

In 1961 durinf the Freedom Rides MLK and hundreds of his followers in an Alabama church were surrounded by an large mob of 3000 angry whites. In his speech to the rally inside the church, Martin Luther King called for federal intervention, declaring that “…the federal government must not stand idly by while blood thirsty mobs beat nonviolent students with impunity.” He called the White House to request Robert Kennedy’s assistance in obtaining use of Alabama’s National Guard. In the end the arrival of armed men of the National Guard was what prevented a potential tragedy.

Nonviolence is not the preferred mode of behavior in all instances. Even in the most democratic societies we, not only allow but, require various government agencies such as police and army to do violence on our behalf to protect us. But in a country like the current IRI or Syria people do not have the luxury that people in Europe and US enjoy. As a matter of fact those same government organs and many others are there to attack the people. So even if you do not wish to defend yourselves against such agents you can not deny the right of others to protect and defend themselves. That is a basic human right no less important than the freedom of speech and actually precedes it.