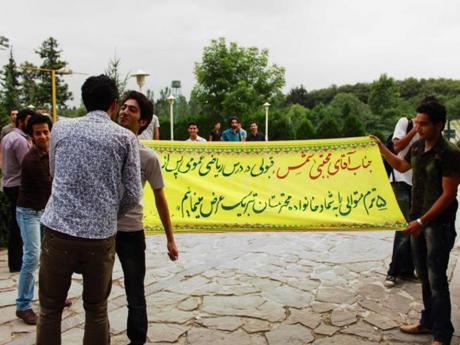 I must have been around 7 or 8 years old when I heard the term Tudeh-ei for the first time. Shahla, one of the young women in our family was going to get married and my parents were quietly discussing the wedding. From what they were saying I could gather that my father was not at all happy about the groom-to-be. He said that he was a Tudeh-ei. That was the first time that I heard that expression. Somehow it sounded as if he had a contagious disease or an incurable addiction. That phrase stuck in my head until years later when I learned what it really meant.

Manouchehr Khan was a student at Tehran University where he was indoctrinated into Tudeh party. He was arrested and spent a few years in jail. When he was finally released, he could not find a job. His friends and relatives tried to help him and finally got him a job as a high school math teacher. He was also a good musician and could play both the accordion and the violin. He took a second job as a music teacher at a primary school.

Shahla had just finished the Teacher Training College and had started as a teacher in the primary school where they met. Manouchehr Khan immediately fell in love with the charm and the innocence of Shahla. He followed Shahla home every day and observed her actions from a distance. After a while, he started talking to her as she was walking home. In the beginning, she was uncomfortable with all the attention that she was getting from him, but gradually she gave in. She asked him not to walk next to her as they got closer to her neighborhood. She didn’t want the neighbors to gossip. So he walked a few steps behind her as he talked about his books and his passions.

After several months, he told her that he wanted to come to her house with his mother and brother for Khaastegari and hoped that Shahla and her mother would accept. Shahla was not sure, but she thought that maybe her mother could help her make the right decision. Shahla’s father had passed away when she was very young and her mother was always anxious to marry off her daughters as soon as she could.

After the visit, Shahla’s mother was not sure either, but they said that they would get back to Manouchehr Khan soon. A month went by and there was no answer. Manouchehr Khan could sense that things were not going his way. So he decided to escalate the situation and threatened that if he did not get a positive response soon, he would camp outside of their home all day and create a scene. He said that he would sit on the branch of the big tree in front of their home and play his violin until they agree to let him marry her! By then Shahla knew him well enough to take his threat seriously.

I knew that tree quite well and my cousins and I used to climb it whenever we went for a visit to Shahla’s house. I tried to imagine where on the branch he would sit to play his violin without falling down! The threat worked and Shahla and her family finally gave in and agreed to the marriage. They had a modest wedding and moved to an apartment near Shahla’s mother’s home.

After a while, they invited all the relatives to their place. What caught my eye was his glass book shelf with a sliding lock. There were lots of books in there arranged in a way that the books in the front hid the books in the back. Later on, as he let the older kids in the family borrow his books, I learned that most of the books in the back were banned and you could get into serious trouble if you had them around the house.

Our relatively large family accepted him with open arms and he became another groom in the family. He also did his share to fit right in. At family gatherings he played games with the kids and after dinner and once he had a few shots of vodka, he would play his musical instruments.

Manouchehr Khan did not believe in owning a house or a car. It was against his belief system. They lived in a rental apartment and took the bus or taxi to work. Over the years Shahla had put away some money and begged him many times to buy a piece of land and build a modest home, but he always refused. Shahla would say, “Look at how everyone is having a home and a new car and go on vacation to Europe and we are just staying home.” But he wouldn’t budge. At the end he finally agreed to buy a car, a used Peykan.

He took the driving lessons, got his license and bought a black Peykan. It all looked strange to me and the other kids in the family that a grown man couldn’t drive and didn’t have a car. The very first time after he got the car and brought Shahla and their little baby girl to a family gathering, we were all waiting outside to see how he drove his car! He was so afraid of the waterways (joob) on the sides of street that he parked his car way in the middle. Shahla quickly got of the car and went inside. The rest of us kids looked disapprovingly at the way he had parked the car and were giving him directions on how he should park closer to the side of the street. Finally one of my uncles came out and parked the car for him. Inside the house Shahla was telling my aunts how Manouchehr Khan was cursing everyone on the road; he called the cab drivers “Gaari-chi” and the fancy women driving BMW’s “Zanikeh Faahesheh!”

Manouchehr Khan was all excited when Khomeini came. It was as if he had finally proven everyone wrong and it was his time to shine. But his exuberance didn’t last for too long. As Khomeini started eliminating leftists, he became disillusioned and bitter. One of his relatives told him that he should get rid of his books because he could get into serious trouble if they found them. But he refused. The books were his most precious belongings. Finally Shahla gave him an ultimatum; either the books go or she would. He reluctantly agreed but he never forgave Shahla for that. One of the relatives suggested that he should rip the books and throw the pages in the waterways at nights when the water was flowing. But he would have none of that. He wanted something more worthy of the books. At the end, he agreed to let one of the relatives take the books to his basement, dig a deep hole, bury the books and cement over it. And that’s where those books are today.

As their daughter got older and went to college in Iran, Manouchehr Khan didn’t like the fact that she was having Khaastegars. He refused to let them into the house and cursed them. Shahla knew that the only way to save her daughter was to send her to school abroad. At the end their daughter got accepted in Germany, moved there and quickly got married to a German.

As time went by, Manouchehr Khan became more and more angry and unhappy with life and he ultimately came down with cancer from many years of smoking. He finally passed away, but he didn’t go without a fight. He kicked and screamed and cursed the world. He made life miserable for everyone around him. It was as if he wanted to take his loved ones with him. Shahla just sat there by his bed side and tried to console him. I am sure that he was jealous of what Shahla might do after he was gone. But she remained a loyal wife through all of that.

He finally left in the middle of the night in a cold winter night in Tehran. I learned from my relatives that as soon as his body left the house, she opened the windows, threw his blankets, pillows and sheets into the washing machine and the next day gave all his clothes and stuff away to the neighborhood mosque.

Shahla came for a visit to the west coast a while back and I made a point of seeing her. She remembered me as a bright-eyed kid who was always playing and chasing the ball. She didn’t know that I knew all these things about her that she probably didn’t want me to know. And I didn’t say anything. I just sat there and listened to her as she talked about her life and her grandkids. She is still way too young to be a grandmother.

As I looked at her beautiful face beaming with kindness and having aged so gracefully over the years, I couldn’t help but wonder that Iranian men of my generation are so spoiled because of women like Shahla. They are so kind and selfless and they gave everything that they had to their husbands and their kids and never asked for much in return.