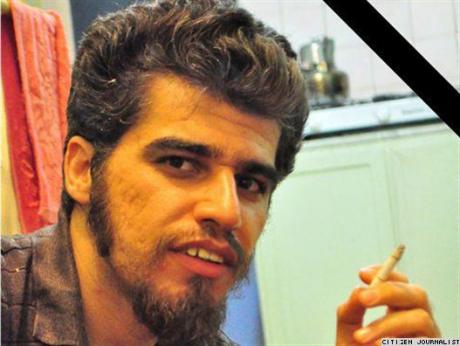 February 14 marks the anniversary of our fallen compatriot Sane Jaleh who died instantly when he was shot by suspected Basij, the paramilitary wing of the Terrorist IR Regime during a demonstration in Tehran. Sane, a Kurdish Iran was a film student at the Tehran Art University and a member of the national student union (Tahkime Vahdat). There are no official records of Sane’s murder which is not surprising because the IR never records or even releases the circumstances of the death of its hundreds of victims brutally murdered in secret hangings or paramilitary executions. Eye witness accounts suggest that between 6pm and 9pm of the 14th of February Basij paramilitary thugs opened fire on demonstrators shooting at them indiscriminately. One of the victims were Saneh. According to his friends and photographic evidence Sane was a stauch supporter of the ‘reform’ politician and mullah Ayatollah Montazeri

True to its brutal and deceptive character, the IR tried to exploit Sane’s death by claiming he was a member of the Basiji paramilitaries  after a Basiji membership card was found ostensibly belonging to Sane.  The card, however, had appeared to be expired and did not resemble ones often carried by Basiji members and regardless of its authenticity many students in Iran and including members of the Tahkime Vahdat are pressured to join the Basij even if they do not participate or endorese their activities.

The IR then began a propaganda campaign claiming Sane as one of its own and given a Basiji funeral in the hope of finding a martyr of its own to counter Neda Agha Soltan who was shot dead by a Basij member on the streets of Tehran.

The IR has tried to censor many of Sane’s friends who have angrily fought back at the IR Terrorist regime’s propaganda exploitation of his life and tarnishing of his memory.