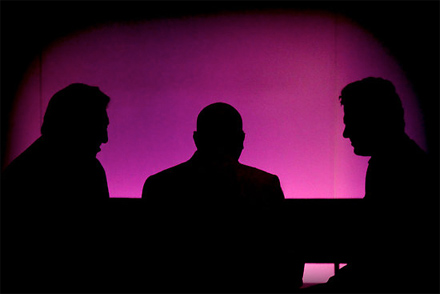 Honestly, I don’t know why I was surprised to see nothing much reported about the meeting of Iranian opposition “somewhere near Stockholm” last weekend.

I should know better than to think that if in 33 God/Allah/Buddha forsaken years, we still haven’t figured out if and how to oppose the child’s play, no-brainer, Mother-of-all-opposables, why anyone would ever bother to report on a gathering of the top most 50 people in what you can only grudgingly call “The Iranian Opposition Groups”.

Which remind me of an un-polished joke (Maz care to help?), “How do you know God doesn’t exist? Iran.”

I should slap myself and call myself “Mama” for birthing such a naive and idealistic and ridiculously optimistic man-boy such as me, to assume anything. Even when faced with the most obvious example of institutionalized oppression, and the Siamese tyranny and treason, the world has ever seen. Even after Idi Amin said, “I myself consider myself the most powerful figure in the world.”

Then I ought to trip myself, and throw myself down the badly lit stairs of hope, in the dark looming shadow of Khamenei who said, “Holding absolute power is heresy in Islam.”

Because other than a question-filled and rightly suspicious piece by Hossein Bagher Zadeh in Farsi (no less!), apparently, it seems, no one here (or anywhere actually!) cared that the top 50 folks in what can only Loos-ly (Farsi spelling) be called the opposition, met last week.

But who am I to question such obvious culturally ingrained, automatic knee-jerk (emphasis on the jerk), possibly genetically engineered apathy in Iranians?

Maybe we are doing fine. Maybe this is not the Matrix. Maybe this is all a reality in which, we who are in the West and actually free, are redundantly free, annoyingly free. I mean who here really needs the reform of a now long forgotten homeland? One that is shrouded in puzzling relevance, bizarre Nowruz (we can’t even spell it right!) rituals, and dolt-worthy fast fading relevance.

Have we truly lost the whole entire original concept of Iran?

Because you’d think this meeting might hold a thimble of importance, an ounce of concern, and a freaking mesghal of interest.

OK, enough preaching, onto the meeting report. Not that any of you lazy bastards deserve one. You know what you deserve. OK I’m preaching again. Stop.

The meeting was held on February 4-5, hosted by the Olof Palme International Center, the very top of foundations built specifically to help people like us. Not that we deserve it. Aaaaah! Baba! Bezar harfesho bezaneh…

The meeting was held in Stockholm at a secret location to protect the attendees from the obvious. Or as we all know, the elder elves of the Iranian tribe, who if they had ever found out where, would have stormed the meeting with all kinds of big-nosed, long winded speeches about Mossadegh, and the history of British conspiracy, and held the microphone to their hair-filled ears, instead of asking simple questions.

The Iranian government wouldn’t have bothered to show up either, because I don’t know if you have heard, but there is this new cloth that you can get your Mollah Aba made out of now a days, that is actually see-through! I know! All the sexiest Mmmmmollahs and Hottie-Tollahs have them, and there was a sale in South Tehran that same weekend!

Additionally, if the Iranian government by now hasn’t taken out Camp Ashraf and all the “volunteers” who “voluntarily” want to “live” there, they aren’t about to waste any time in Sweden.

Because in spite of the US, Iran actually owns Iraq free and clear now. Made their last payment a month ago and are just waiting for the title. Then they are going to fix it up and drive it for years to come.

Which for some reason reminds me of the punch line, “…No, my son, let’s walk down the hill and screw all of them…”

The meeting was also organized by Unity for Democracy in Iran. The report said conducted, but conducted to me, this time of day implies orchestral, and I would rather think (and hope) that it was more of a workshop, and not a performance.

Who Unity for Democracy is? Can’t say I care. Sounds good to me, and at this point in my fast fading life, I’ll take it. I’ll figure out how it works later. So far it seems like some sort of new iPhone.

According to the foundation report which was graciously translated by Google Translate by first pasting, then hitting “enter”, more than 50 dissidents gathered, had a cordial visit with each other, agreed that they needed to build a consensus and continue talking to each other, and that the areas they could agree on were:

– Opposition to dictatorship, discrimination, and the violation of Human Rights.

– Achieving democracy and a separation of Religion and State through free elections according to international standards.

God I love Apple! Their products work so well together!

So this sounds good so far. Sounds great actually.

But that’s where the info ran out. No business plan, no product specs, no launch date, not even an artist’s rendering. Hmmm. Even more Apple like. If only I knew someone who worked at Apple!

I don’t know about you, but whenever I need to know anything about “opposition” I think it wise to consult with an expert. Or in this case, someone who attended the meeting and who would talk about it.

Allow me to re-introduce Ahmad Batebi. Possibly the most recognizable icon of Iranian resistance, if you don’t know who Batebi is, I can’t really do “this” anymore, and you will be sent off now, to Wikipedia and Google or Bing (if you’re really Gay) to catch up with the rest of the class. “No Soup for You!”

Being inherently lucky this week, I could and did speak to Batebi, who could and did attend the “Hoomeh” i Sverige last weekend. Because he was invited. Because he matters. It is important to repeat and accept and get, that people like Batebi matter.

In this world especially they matter. Because actually in the other world, nothing matters. But while we have them, the Batebis are of crucial importance. It is the Batebis who took the first steps knowing in their hearts we would follow.

But knowing and thinking are different things when it comes to Iranian resistance to oppression, tyranny, and treason.

No surprise that when I spoke to Batebi for he first time, I apologized. For everyone.

“Sorry we were not there when you thought we would be.”

And of course the gracious response that only a hero who was betrayed by the people he tried to save, can give. “It’s OK.”

You know, I just changed my mind.

I’m not going to tell you what he told me happened at the Palme meeting.

I’m too mad at you right now.