Trita Parsi in the Lion’s Den 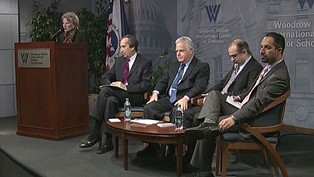 On February 22, 2012 Trita Parsi of NIAC participated in a panel discussion at Woodrow Wilson Center about Iran, Israel and the Arabs. This was the first time that I had seen him in a not-so-friendly environment and I heard him say things that I have not heard him say before, like the Regime is repressive and will be toppled by the Iranians or the Regime’s influence in the Region has diminished. I thought that it would be interesting to share some of his comments here.

To set the stage, the 1:30 hour panel discussion was opened by Woodrow Wilson President, the ex-Congresswoman Jane Harman of Venice Beach, CA who is the daughter of a Holocaust survivor and back in 2009 talked about dividing Iran along ethnic lines to reduce its threats!

The opening statements starting at 0:15 minutes immediately made it quite clear that the Israeli and the Arab panelists clearly understood the threats posed by the Regime. The Israeli panelist argued that a nuclear-armed Iran will result in nuclear arms in Saudi Arabia, Turkey and Egypt which by the Islamist “Pakistani” tendencies of these countries will place the future Israeli generations under the nuclear threat by one Iran and three Pakistans! A prospect that is completely unacceptable to Israeli leaders.

The Arab panelist was quite blunt about the Arab-Persian, Sunni-Shia divide and the fact that Arabs and Iranians are not natural allies and how the “Arab Spring” has taken the wind out of the Regime’s claims about “Arab Street” leadership and the Regional dominance.

Trita (starting at 37:30) acknowledged the significant hit that the Regime’s influence has taken in the Arab world following the Arab Spring and the current situation in Syria. But he overplayed the current divergence between the US and the Israeli perspectives regarding Iran, and in general stuck to his talking points.

The best part of the discussions was the Q/A segment starting at 51:00. Trita stated that he does not foresee an Israeli attack on Iran in 2012. It is noteworthy that his opinion about the topic is in sharp contrast to the war-talk and hysteria that we have been seeing from NIAC/CASMII and other like-minded contributors on Iranian.com.

In the last ten minutes (starting at 1:19:00) the Israeli panelist put Trita on the spot and asked him point-blank about the Regime in Iran and what should be done about it, Trita replied by saying that the Regime is repressive and the Iranian people will at some point get rid of it. But he quickly went back to his talking points of targeted sanctions and negotiations.

In my opinion, Trita and NIAC, given the realities of the time are beginning to see the light and the end of the Regime, but they are still struggling with their long standing stated policies and have not been able to articulate a clear message on how to go forward. That will ultimately make them irrelevant.