From Tehran to Homs: Musical Solidarity 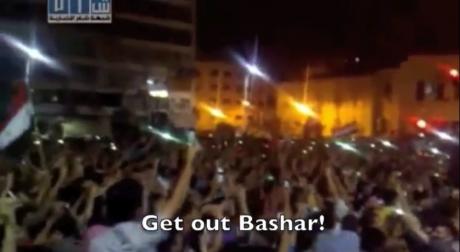 The Syrian Revolution is approaching it’s first anniversary and the situation is looking bloodier by the day. In a not entirely unexpected move, Iran recently sent two ships through the Suez Canal to dock in Tartus for a short time, achieving very little but reminding the world (and Israel) that they intend to stand with the embattled Syrian regime.

It was, then, a rather fitting moment for Iranian rap duo Emad Ghavidel and Hamed Fard to release this song in support of the people of Homs, a city currently under siege by the Syrian military because of the weekly anti-regime protests that have been occurring there daily for months.

The video of “The Battle of Homs” is just a slideshow (apparently the first picture is actually from Diyala, Iraq) but includes an English translation of the emotionally-charged Persian lyrics (you can find them in full here). Some of the most interesting lines are those that explicitly acknowledge the singer’s Iranian-ness. Although he mentions that his experience of war informs his desire to speak out against the Syrian repression, he avoids mentioning the domestic situation, aiming the majority of his vitriol at Russian President Medvedev, who has argued for patience with Assad’s constitutional reforms. A particular gem are these lines:

“The one I can’t reach is Medvedev

I wanna spit on him, but it’d be a waste of good spit”

This solidarity video follows a year of unprecedented outburst of cultural productivity of revolutionary music and anthems across the Arab World. The Syrian revolt, perhaps because of its extensive duration, has produced a number of memorable hits, and below is a collection of a few of my favorites…