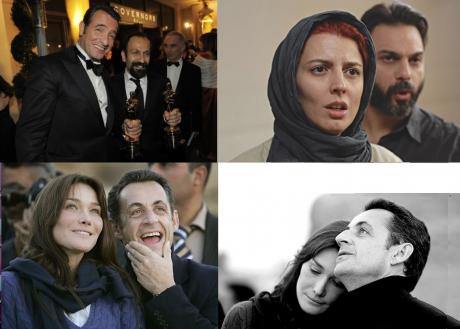 During an interview with RTL this morning, French President Nicholas Sarkozy hailed the success of French film « The Artist » at the Oscars whilst praising Iranian filmmaker’s Oscar win. The French President recently officially declared running for Office for a second term in the upcoming Presidential race opposing him to his major political opponent: Socialist François Holland.

The President’s reaction Confirmed claims a year ago by French Daily “Le Parisien” which revealed that Sarkozy and actress/singer wife and First Lady Carla Bruni were “touched” by the Iranian Film “A Separation” which they watched long ago prior to the recent Oscar Buz. ( See related News)

Bruni is often considered as the French President’s cultural advisor credited to have “educated” him on art house Films ever since the two married on the onset of his election.

NOTE: Watch and Listen to Complete Comments by Sarkozy on Farhadi’s film In Following interview Go to 1h59 in link  Here

Golden Silence : How The Artist turned silence into gold (bbc)

DUJARDIN WHAT ELSE? French Star competes with Hollywood Golden Boys in Oscar ® Race