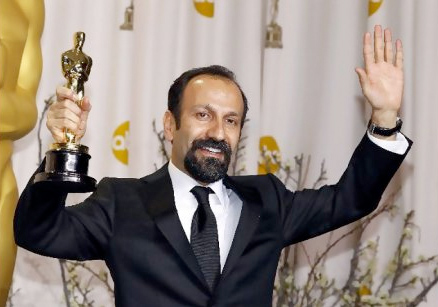 As usual it seems for the past 3 decades, whenever Iran wins anything on the world stage, which thankfully is rare, we as Iranians wince and smile at the same time, or Smince.

Last night’s incredible win by Farhadi for “A Separation” was no different.

I say “by Farhadi” because I think out of all, he has certainly worked the hardest, had the greatest challenge, and in spite of all the odds against him, found a way to overcome his height disadvantage and win.

Often short people do this. More often short Iranians do this. Just look around your town and see which Iranian is successful and how tall he is.

And Farhadi is most certainly a short plucky Iranian man.

None of us wants to acknowledge that this Iran could produce an Oscar winning film by parading out an intense looking light-skinned fair-haired, and clear-eyed Iranian woman dressed in the lightest brown hejab legally allowed.

None of us wants the entire critics list of Rotten Tomatoes to give the sanction of the worst oppression of women and assorted other human rights violations a 100% favorable rating.

None of us wants to hear the coming parade of tirades by Iranian government officials about how this is a moral victory by the “sweetness” of Eslam against Zionism and the moral corruption of the Imperialist Hegemony of the West.

I can hear it now. Just wit for Khamenei’s speech this Friday. It will be important, because if he mentions it, he will confirm that under all those rose-tinted-robes and feigned deity, he’s nothing but a slimy a politician.

If he doesn’t mention it, then truly god help us all, because that means he actually believes his own bull-shit.

[Note: Ironically, Iran has always claimed that the Oscars have been influenced by the Israeli lobby to tilt against Iran. I wonder what the explanation will be for last night’s win!]

So, really, deep down, none of us wants this Iran to win. Not this way. Some of us old enough to remember watched Jean du Jardin but day-dreamed about Behrouz Vossoughi winning back in the day when BV was a younger BV.

Yet all of us day dreamers and not, sat last night silently rooting for “A Separation” and Farhadi anyway. Some of us who swear they never pray, prayed. Some of us who don’t believe in superstition, crossed every finger and toe. Esfand was dooding.

Do we, like the Rotten Tomatoes critics, now accept and agree that an albeit stylishly hejabed Iranian woman is now the definitive icon of Iranian women and a true representation of this 21st century Iranian society and culture?

And is a State sanctioned film industry that wins an Oscar, an acceptable paradigm?

We all need to look long and hard at this, because it’s happening, and it’s real, and if you disagree, you’d better get up and say or do something about it.

If you agree, please remain seated. The next show is about to begin.