Netyanyahu: The Red Line must not be crossed. 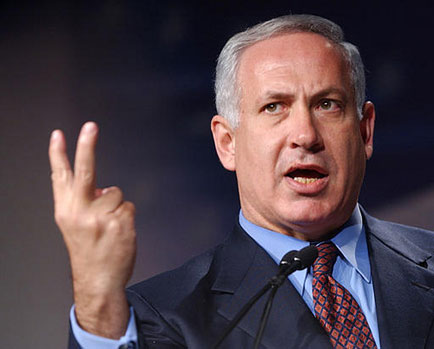 You may not like to hear it from Netanyahu but he is right. Within months if not a matter of weeks the IR will reach a zone of immunity. For Netanyahu and Israeli hawks this means the point when the IR will be able to enrich high grade uranium to such a large extent making it impossible for any military action to take place without a human catastrophe. The veracity of such an assertion by the Israeli propaganda machine is debatable.

However, for all Nentanyahu’s arrogance, his unconscionable tactics to persuade and bully the Palestinian Authority to agree to Israel’s unilaterally drafted terms and conditions for his model of a two-stage solution the man is right.

There will be a point where unless there is a regime change in Iran, Khamenei and his wretched cronies of mullahs in the Council of Guardian and the Assembly of Experts will continue to rule Iran with an iron fist for the next 50 years. The IR indeed will become another North Korea, Republic of China or Castro’s Cuba where by rein of power will become a permanent fixture in the country defeating the aspiration of Iranians to establish universal human rights and a democratic government separating power from church and state. The question is not whether a nuclear armed Iran will become an existential threat to Israel but whether a fully armed Iran will send a message to all opponents of the regime regardless of ideology that it can never be defeated, not in our lifetime anyway. It will send a message to Iranians that it can execute 500 ‘official’ Iranians every year (and not the 200 secret murders of political detainees in Iran’s notorious prisons as documented by Human Rights Watch and Amnesty) and ignore calls for a moratorium; it will send a message that it can arrest and imprison journalists on a whim and even murder them like Omid Mir Sayafi and pass a death sentence on others such as Saeed Malekpour; it can give prison guards condoms to rape women and men protesters without rebuke; it can pass a death sentence by stoning on women such as Sakineh Mohammadi Ashtiani ignoring interntional calls for a stay of execution; it can execute minors such as 16 year olds such as Atefeh Rajabi without due process; it can continue to imprison opposition leaders including a former prime minister and violently clampdown on opposition rallies, clubbing and shooting indiscriminately at protesters; it can continue to impose a medieval Sharia law dominated by Islamic clerics who control the judiciary and empowered to select candidates who are Muslims; they can continue to persecute religious minorities and threaten to kill apostates such as Yousef NaderKhani.

Netanhyahu is right. There will be a point of no return especially as all remnants of the opposition in Iran is dead. Its sorry excuse for a leader, Mousavi and Karoubi are under house arrest having instilled false hope to bring about change as part of their sham reform movement which has withered away. Iranians need material support from the international community to help realize their hope for liberation. If diplomacy could change the Islamic Republic and stop it from sponsoring terror and force it to change its behaviour to conform to international standards of human rights domestically then it should have worked by now. NIAC and the so called Peace movement advocating friendly engagement with the IR have achieved nothing in the last thirty years which they can proudly demonstrate to the world that Khamenei and his cronies can be reasoned with. Executions have increased. Nothing in the way of democratic reform has been achieved and Khamenei has even announced that he may even abolish the post of President. Academics and protesters continue to be detained, tortured and killed.

The Middle East has enjoyed an Arab Spring, the countries of the former Eastern Bloc have broken away from the evil control of the Soviet Union, Glasnost, Perestroika and the solidarity movement took place bringing with it a wind of change for its people but Iranians are still swamped in the same cesspit thirty years ago. Milosevic, Gaddafi and Saddam all gone. Iranians still have Khamenei.

Netanyahu and Obama are debating as to where the ‘red line’ is. The Islamic Republic has already passed the red line. It has transgressed and needs to be punished. Enough is enough.