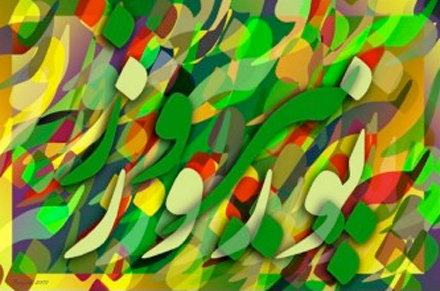 The controversy over the correct English spelling of NoRooz comes up every NoRooz. The self-appointed Guardian Council of NowRuz led by its Supreme Leader Dr. Yarshater founder of the debatably “valuable” Encyclopedia Iranica project, awakens on the first of March and begins its campaign anew to try and change the phonetic rules of ALL English speakers of All the world (Bwaah! Ha! Ha! Ha!), in order that hopefully this year ALL English speakers around the world will succumb their language and this year finally, learn to say NowRuz just like they say NoRooz right now.

This is always done in a sneaky Farsi article. Which is why I always take the centered position of the floating lotus stance, and with my free right hand pointing forward, palm up, make the annual, “come forward” motion. Call me Behrouz Lee if you likey. Me do likey!

Why they insist that ALL English speakers and politicians and professors at various prestigious Universities must say NoRooz when they read NowRuz, is the reason I wake up every day with a bounce in my step and a smile on my lips, lasting until NoRooz is over, just so I can see what ends they will go to this time around. It is my own NoRooz tradition.

This year my old friend/nemesis Bahram Gerami has the same old task of doing the same old convincing or arm twisting.

The FIRST Wife argument Gerami makes is Unity. Apparently some Iranians are still illegally using the NoRooz spelling. And that absolutely has to stop. Forget that NoRooz works perfectly for a minute, and think about Unity. I looked up Unity in the Encyclopedia Iranica and it defines it as “Doing as You Are Told For No Apparent Good Reason”.

The THIRD Man-reason Gerami gives, is the proper way Farsi phonetics works. Funny, I thought we were talking about English phonetic rules, but the degree of this psychosis is best demonstrated by letting him make his ridiculous assertion that Farsi Phonetics could possibly have anything to do with English Phonetics. Because I hope everyone understands that they don’t. Can’t… Because… it’s… a… completely… different… language?

The FOURTH Protocol Gerami presents us is the classic use of English words like Low, Know, Row, and Sow to make the weakest case, for why Now can be legitimately pronounced just like No. Except that Row (a fight or argument) and Sow (a female pig and highly appropriate in this case) can also be pronounced like Cow. Gerami is careful to leave out the example of the word Now itself, which in English has ONLY ONE PRONUNCIATION, namely the one you cannot use to say NoRooz with.

The FIFTH Element (Yes there are more than 4!) Gerami was told by the founders to give us, is an actual lie. He suggests that All Americans now know how to say Now the correct Farsi way, or as No. And that you too should adopt this new trend whenever you say NoRooz.

Of course this is a lie is proven because, most Americans read Now as they always have, and say Now as in “How Now Brown Cow”, which is a popular English elocution colloquial speech and acting vocal technique, one that has a very rich cultural tradition going back to the 18th century, and incidentally far more popular than NoRooz will ever become in the US.

Thought FIVE was too many? Don’t, because Gerami has a SIXTH Sense for you to choke on. And what better word to choke on than the word Blood. Gerami threatens/suggests we cannot use Rooz because of how Blood is spelled. Which if you are easily scared and inclined to be “persuaded” with tactics like this, it might scare the living Poop out of you, causing you to get out the Scooper, in case some has gotten into the Pool, or make you Toot your own horn, by calling your local newspaper to tell them you now have the Poop on NoRooz and can give them the full Scoop. How Toop is that!

You’d think with a perfect score of 0 for 6, Gerami would be done. But like any good insane Iranian on a pointless Mission to Mars, he is not done by a longer shot than actually trying to sell NowRuz as NoRooz. And especially when you want him to stop, he will continue. This is only his deepest pleasure.

The inevitable UNESCO FIASCO arrives on time and fully loaded with cheese. The story goes that once upon a time a group of hunters lead by Yarshater went hunting and stumbled upon UNESCO mistaking it for a wabbit, and shot it so many times that to get them to stop, UNESCO agreed to record NowRuz as NoRooz. Along with the usual distinction of recognizing the holiday as a world heritage date.

Next Gerami brings in the Big Kahuna himself Dr. Ehsan Yarshater who singlehandedly has created Encyclopedia Iranica the single most detailed record of one man and his carefully chosen staff’s approved opinions on Iranian history, ever recorded by one person wishing to express a singularized opinion of Iran. Think Wikipedia if they allowed bias.

Canadian as well as the US White House’s mis-use of Yarshater’s lobbied mis-spelling of NoRooz, further proof by Gerami of the legitimacy of the illegitimacy of NowRuz.

And speaking of Oxford and Cambridge, although none of their English linguists were consulted, their Middle-Eastern and Iranian studies departments finally agreed to the arm and nipple twisting and acknowledged that if Yarshater Inc. and Co. insist on spelling NoRooz that way, who are they to argue? After all, anyone at Cambridge and Oxford stuck in the Middle-East and Iran studies department, is either Iranian, or just trying to maintain tenure.

But all kidding and ribbing of this year’s bet loser Gerami aside, to really be fair about why NoRooz is the best overall way to spell NoRooz, you need only 2 tests or proofs.

Because if you ask, there is no way in hell that an English linguist, an expert in the phonetic rules of English, will listen to you say NoRooz 5 times and EVER come back and say, “You know Gerami, it was close, but you and all your native Farsi linguists were right about how English phonetic rules ought to be changed, and in spite of hundreds of years of the development and perfection of the English language and it’s phonetic rules, the most commonly spoken language in the history of the world, you and your fellow brethren and mad followers of Yarshaterism are right after all, NowRuz, IS the best English spelling of NoRooz.“