NO KENNEDY: French Star Blasts Obama for Inaction on Syria 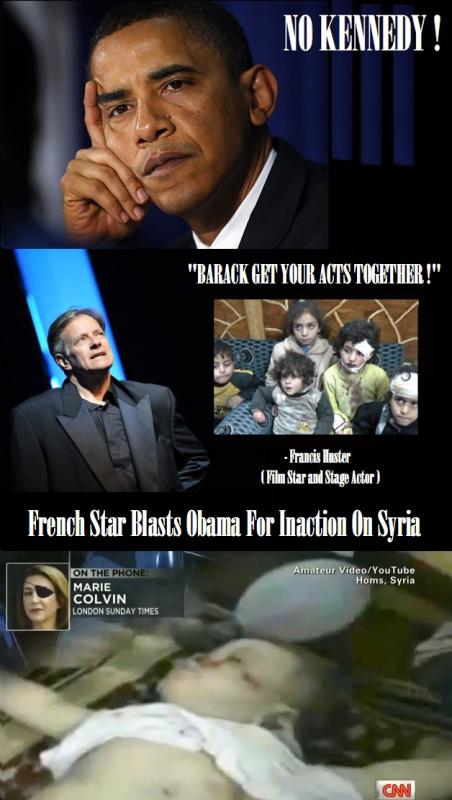 Respected French Stage and Screen actor Francis Huster expresses outrage at the American president’s indifference towards to plight of the Syrian people saying his inaction is a Licence to Kill.

Adding if it were a Kennedy or De Gaulle they would have not allowed the bloodshed to continue as it is with total impunity.

Francis Huster: “What is taking in Syria … and I would like to say here that I am shocked by what I am seeing to think that if John Kennedy was here or De Gaulle these great men wouldn’t have allowed these crimes to take place. Personally I have to say that each day that passes the less I think of Barak Obama as the “great” man he has been presented to us in the medias. As for Putin on the other side …

‘Audrey Crespo-Mara : Yes but with a Putin and Chinese Premiere blocking the slightest resolution what would you expect De Gaulle or Kennedy would have done ?”

Francis Huster: “But frankly what is the President of the United States waiting to go into Syria ?, If he can’t make it who will ? He is the only one who can do something but he has decided to remain idle. No Truly the Europeans are trying to push things forward and particularly I salute French foreign Minister Alain Juppé for his commendable efforts but all this reminds me of the Civil  War in Spain where Western Democracies remained idle. I am truly worried that we are on a brink of a Real war to come”

Kennedy addresses the nation on the Cuban Missile Crisis :

As part of the American strategy to rally the international community behind their actions against Cuba, the U.S. Ambassador to the United Nations, Adlai Stevenson, goes to the Security Council meeting to make the case for the U.S. embargo on Cuba and to prove the existance of ballistic missiles threatening a great part of the country.  Ambassador Stevenson delivers one of the best speeches the UN has ever heard and pratically destroys the soviet ambassador’s strategy of denial.  Here, we see a reenactment of that meeting in the movie “13 Days”.

SYRIANS IN NO MOOD FOR SINGING

Journalist Marie Colvin in one of her last reports from Syria. She was a great journalist and an amazing person. Killed while covering the plight of the people of Homs Syria.

CNN: Activist: Assad will have to kill us all:

A Syrian activist says the fighting will not stop until either Assad is gone or the activists are all dead.

A GODFATHER’s WIFE: Does the Syrian autocrat’s wife have to stand by her man?