Now You Know Not to Vote in Iran 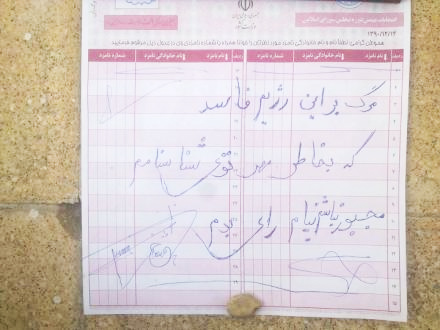 Hopefully with the recent parliamentary election in Iran last week, everyone now knows why you should NEVER vote in an Iranian election.

I take that back, ideally you should vote, as long as you protest vote.

You know what a protest vote is right? I ask the question because recently I spoke to a Green movement protester and asked them why they ran instead of sit down, when they were being attacked by the cops and Basijis. The answer was “We didn’t know what to do”.

“You mean you haven’t read about how Martin Luther King and Gandhi or Mandela marched, or watch the Ukrainian Orange protests?”, I asked.

“No” was the answer.

So I ask now, does everyone know what a protest vote is? Look up at the image of this piece. This is a good one. Although I could do better.

The Green movement mistake was running away, and not sitting down on the ground and locking arms, as soon as the Basijis and cops started in on them.

Faced with the sheer manpower requirements, the protests could have gone on for days, and possibly turned even bigger, with far different result.

Additionally going to the very symbol of tyranny and oppression of both regimes, namely Azadi square, was stupid. Like they did in the Orange revolution, everyone should have learned to get a whistle, and march over to Khamenei’s house and then sit down, sing songs, and blow their whistles until he gave up and quit. It is likely that within 3 days of no sleep, he might have even died. Again, let the cops figure out how many trucks and manpower they need to get into the koochech to haul everyone away. While you wait, everyone just sit down and enjoy the moment.

Critics of this say, “Bruce, you cannot do that, did you not see the video of the truck that ran over the protesters?”

I say, “Yes I did, but they were running.” If the ALL stood still, the truck driver would probably not try it if he thought he would not make it through, and he certainly would think twice if there was a good chance that he would be pulled from the truck.

It is a bluff, for sure. One that takes far more courage than I certainly have writing this now. But that’s what was needed then. Not to scatter, not to gather at Azadi, not to throw rocks back.

What was needed and still is, is very simple. Sit down, lock arms, make noise, demand Khamenei to leave and a free Constitution be restored.

Once you have a proper Constitution, the rest of the details can fix themselves after that, but the more complicated your protesting demands (ie recounting votes), the harder it is to rally feet on the street support.

For now barring a properly planned protest march though, what we have left to do, is protest vote.

A protest vote is where you don’t participate for real, but instead add a comment or a protest note in the ballot and make the ballot counters still have to count it.

The idea that Iranians don’t do this, with a ballot that allows you to write whatever you want, shows the degree and level of fear they have and that this loss of courage has made them lose their talent and passion for “Kerm-Rizi”.

Truly a sad day indeed when that happens.

This will exhaust the staunchest loyalty of those that have the thankless job of counting useless pieces of paper. Especially if you insult him in your comments. And when a ballot counter stops caring, that’s when we win.

I would love to have a 99% participation one day, where 99% of those ballots were protest votes, that the government had to count, only to find out no one won anything.

Then what would they do? Lie of course. But they are probably lying now anyway. This recent vote was conducted perfectly, they counted the votes the way they wanted, and not only fooled everyone in the world, but also made it look like it was a close race.

They even made it seem exciting with all sorts fancy chocolates and candies depicting all sorts of sexy alliances, even called the candies sexy names like “reformists” and “6+2” and so on to make it look like and appear that there was a chance to reform anything. I would have voted for 69.

Of course there isn’t any chance at reform. Anyone who does not know that Iran’s parliament has less power than the mayor of Esfahan, doesn’t know how much power the Mayor of Esfahan actually has.

Anything that comes out of the mouth of fat parliamentarians (if they could even speak as one) has no bite, no authority, without the complete tacit approval of Khamenei. even if the President agrees, because the President is also a pet mouse of Khamenei.

This is why this election’s lottery winners have to next swear the oath of loyalty to him before they can get in line for the 6-yearlong feast now being laid out for them to enjoy. As long as they behave.

There is also no chance of them misbehaving, because they were all pre-chosen by Khamenei aka Guardian Council before the election even began.

To understand Iran you need to re-watch “The Wizard of Oz”.

Like the Lion, we have always had and still have the courage.

Like the Tin man, we have always had and still have a heart.

Like the Scarecrow, we have always had and still have a brain.

But unlike Dorothy we haven’t yet figured out how to click our heels. Or that Khamenei is a very small coward hiding behind a very big curtain.

Last night I asked God what he thought of Khamenei, and God said, “Who?”.

“Khamenei” I said, “the Supreme Leader of Iran”.

God said, “Sorry, I still have no idea who you are talking about, but let me check my Spam folder from my iPhone.”

Yes, God has an iPhone. Steve brought two with him.