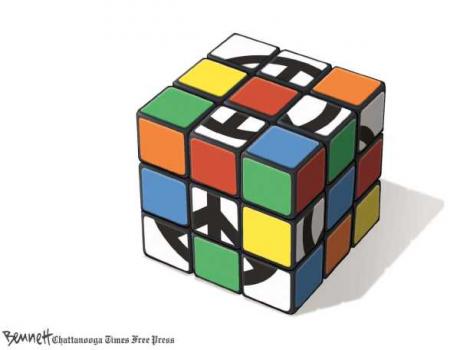 “Political sources judge that the prime minister has a majority in the cabinet which favors a military strike against Iran, even without American approval. Yesterday, Netanyahu said he wouldn’t hesitate to attack Iran even without the approval of Pres. Obama…A senior official said Bibi believed it would be best not to wait for the November presidential elections because he didn’t trust the president to deal with the problem after the election.”

(Note, “Political sources judge…”, which means what? It means the title is based on a judgment of a source and not the result of any vote by the cabinet. Right?”)

(In the interest of providing an antidote to the doom and gloom here is joke…..which somehow relates to what’s going on, don’t you think?)

But, being a practical leader, after several days, he got an idea. He went to the phone booth, called the National Weather Service and asked “Is the coming winter going to be cold?” “It looks like this winter is going to be quite cold” the meteorologist at the weather service responded.

The chief again went back to his people and ordered them to collect every scrap of firewood they could find. Two weeks later, the chief called the National Weather Service again. “Are you absolutely sure that the winter is going to be very cold?” “Absolutely” the man replied. “It’s looking more and more like it is going to be one of the coldest winters we’ve ever seen”. “How can you be so sure?” the chief asked. The weatherman replied “The Indians are collecting loads and loads of firewood”.