We are Persians… Hello! 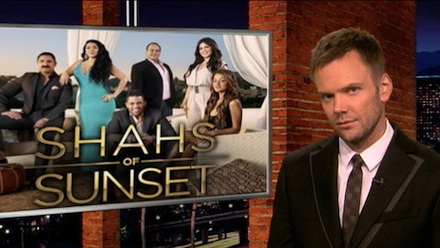 The negative response of the Iranian-American community towards the reality show, Shahs of Sunset is noteworthy and entertaining. The Iranian-American community that has worked so hard in the last 30 years to hide its skeletons in the closet has found itself battered by a thunderbolt of reality. The dirt is out and the elite are unhappy. Facebook pages, petitions, articles and commentaries against the show have gone viral. Some have even gone as far as suggesting that the whole thing is conspiracy by Jews to distract attention from a military strike against Iran, which is in its planning stages. The Iranian-American community is not only under attack by the ugly of the Islamic Republic but also by the fabulous of the Beverly Hills.

What upsets us most about the Shahs of Sunset is its accurate depiction of the Iranian psyche. The Shahs are real. Like many of us, they are a group of fun-loving, hard-drinking, backstabbing, money-worshiping, showoffs who spend every minute of the day reminding each other how much they know about everything. The only difference between Shahs and the rest of us is that we fake the funk and they hump the trunk. Shahs are vain and unapologetic. They do not seem to be constrained by a typical double life that the rest of us lead.

You do not find doctors, lawyers or engineers among the Shahs. That is upsetting to us. After all, many of us have spent hundreds of thousands of dollars earning useless degrees just to have a title next to our names. Shahs do not have PhDs and do not pose for pictures in front of bookshelves full of untouched books. They are shallow and they are not afraid to show it! Worse of all, they don’t talk politics! What kind of a fucked up Iranians are they?

The gay dude, Reza reminds us too much of friends we grew up with back in Iran. That makes us uncomfortable. After all, our gays are not supposed to act gay. Like many other things in our culture, we sweep our cranks under the rug. That is why we invented the rug. Our gays are not full flavored gays but rather gay-light with only five calories. Reza on the other hand is very gay and seems to be getting along just fine. That is not how things are supposed to work. You are supposed to leave your gayness at home and bring your un-gayness out to the party. That is how we roll.

The ladies of Sunset are sarcastic, whiny and conflicted. They are looking for their hairy Persian prince but at the same time, they are not sure if marriage is right for them. Just like most Persian women, they just are not sure what they really… really… really want. They constantly moan about the abuse they receive from family members for being single but they seem to enjoy the attention. They also switch to this weird Puerto Rican accent when they get emotional! Finally, like many (not most) Iranian women, they are gold-diggers with no plan of attack other than half-baked charm and phony mystic.

There is no reason for the Iranian community to get upset. After all, everybody knows that Shahs of Sunset depict Iranians as much as Kardashians depict Americans. I mean we all know that the whole thing is a fake anyways … or is it not!