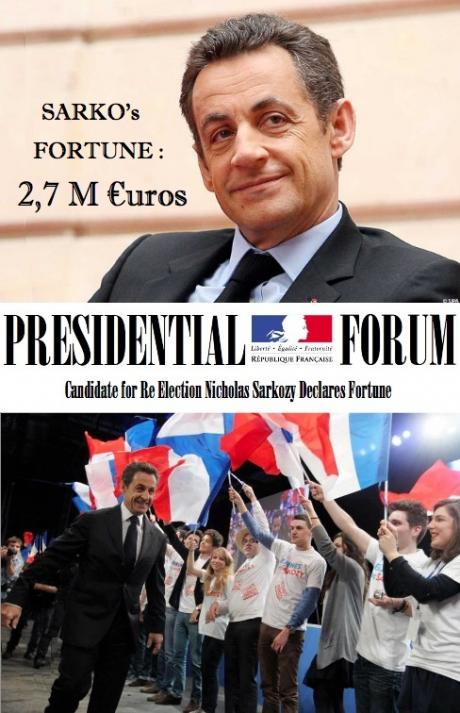 In a bid for transparency and as required by law, French President and candidate for re-election, Nicholas Sarkozy, has declared that he possesses a heritage of around 2.7 million euros.

The President of France and candidate for re-election, Nicholas Sarkozy, has declared that he possesses a heritage of around 2.7 million euros. The personal fortune of Sarkozy mainly consists of two safe life, according to the statement deposited with the Constitutional Council and published Saturday in the French Official Gazette.

The outgoing head of State has signed two safe life, one of them amounting to 2.3 million euros with the HSBC entity and another for 277,000 euros with Neuflize OCB. The current account contained a total amount of about 56,000 euros to date of February 17, 2011.

That is the slogan that Nicolas Sarkozy hopes will help him overturn the opinion polls and win a second term as French president.

Campaigning is underway in France’s April presidential election. Incumbent President Nicolas Sarkozy faces an uphill battle for re-election. Many French dislike his leadership style. But the biggest voter concern is France’s sluggish economy, and how to turn it around. Lisa Bryant takes a look at the issues from Paris.

Related Blogs on Finance and Politics:

Other Related Blogs on Sarkozy and French Elections: