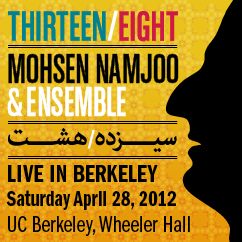 On behalf of Payam Entertainment:

Thirteen/eight is a compilation of six pieces by Mohsen Namjoo which were developed in the United States during the past year.  The performance has been prepared in collaboration with california-based musicians James Riotto (Contrabass), Robert Shelton (Keyboard), Ezra Lipp (Drums) and Greg Ellis (Percussion).  Payam Entertainment produced a series of live performances for 2012.  The inaugural performance in Berkeley, California will be recorded in preparation for a future double-album release by the same title.

Thirteen/Eight is based on a research project including three pieces in which Mohsen Namjoo has fused the Iranian musical scales of “Shour”, “Chargah” and “Rast-Panj-gah” with Jazz.  Two other tracks titled “Khat Bekesh” and “13/8” have been inspired by music from Frank Sinatra and Igor Stravinsky respectively.  These are based on the “Segah” scale and the “Isfahan” vocal renditions.  Both of these musical renditions are based on poetry by Mohsen Namjoo with themes pertaining to the futility of people’s ( Iranians’ ) hope in the concept of the ‘saviour’ who shall one day appear and restore a free homeland for them.  Through his innovative use of literature and sonic effects, Namjoo challenges those ethereal hopes which are in his view as tragic as comic.

Payam Entertainment is proud to present Thirteen/Eight in Berkeley on Saturday April 28 at the Wheeler Hall, UC Berkeley and Los Angeles on Sunday May 20 at the Orpheum Theatre 842 S. Broadway, Los Angeles. A musical tour-de-force by a singular voice from Iran.