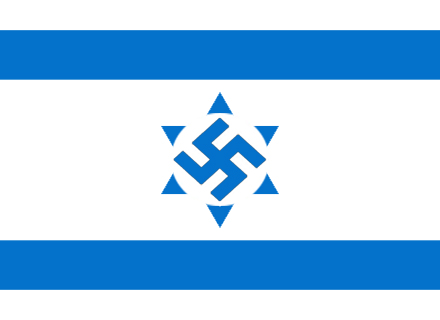 1. The Nazis declared “Germans” a distinct, superior ethnicity  and
attempted to unify all “Germans” throughout Europe together into a unified political force in an
ethnically and religiously homogenized realm (reich).

2. The Zionists have declared “Jews” a distinct ethnicity and have made “Jews” a single category bringing a group of people together into a unified political force in an ethnically
and religiously homogenized homeland.

3. Zionism came first, however, and Nazism was partly an emulation of and partly a “pre-emptive” response against Zionism.

4. Under Zionism (or Nazism,) a state would be “redeemed” through
violent purification and a new Jewish-only (or German-only) “settlements”
would be created through ethnic-cleansing – in Palestine all the
way to the Tigris-Euphrates (and in Europe from Poland all the way to the Ural
Mountains).

5. The new state would be egalitarian, worker-friendly, or
“socialist” democracy in name, but it would reject the internationalism that is
normally essential to socialist doctrine: the blessings of socialism and
democracy would be neatly reserved for one distinct ethnicity, above all, in an
officially ethnic-supremacist land wherein the special ethnic rights of
the favored nationality would supercede the human rights of less
favored groups.

6. The new state would be a democratic “National Socialism.”

8. Both Nazism and Zionism are based on a fancifully mythic
interpretation of history and nationality, one producing a “Master
Race,” the other producing a “Chosen People” or “Sons of the Covenant”
(B’nai B’rith).

9. Both latched onto a simplistic, ancient religious symbolism badly interepreted – the
swastika and star of David – as if to assume from it some special
authority. In both cases, the adopted symbol actually has very little to
do with the ethnic group it supposedly represents, and nothing to do
with the violent racial or ethnic superiority claimed by those who use
it as a banner of ethnic conquest and ethnic-cleansing. (Keep in mind
that the Magen David has little to do with ancient Israel and nothing to
do with the Eastern Europeans who converted to Judaism several
centuries ago.)

10. In both cases, Zionism and Nazism, the ethno-centric tribal
chauvinism and racism commonly found in Eastern Europe was transferred
to and adopted by otherwise-modern elements of a broader group – “the
Germans” and “the Jews” – and that Eastern European racist ideology
would displace what was civilized and decent in the larger groups.

11. The main difference is, whereas Germans adopted an Eastern European
tribal ideology, in the case of Zionism, a racist Eastern European group
(Ashkenazim) physically migrated, with their tribal ideology, to
Palestine, a totally MYTHIC “promised land,” to which they had no
hereditary or cultural ties, and found success by imposing their racism
on innocent, unarmed, helpless, and non-racist people (a few mythic references to the Holy Land and its history do NOT constitute a cultural tie.)

12. Both Nazi Germany and Zionist Israel would build military power,
secretly violating international law by manufacturing weapons –
including NUCLEAR weapons – which they were not supposed to have, and
both would conduct illegal espionage to steal materials they could not
otherwise obtain.

13. The Zionist ethnic conquest of Palestine can be closely compared
with the Nazi drive for “lebensraum” in Poland and Eastern Europe through the importation
of a desired ethnicity (German or “Aryan”) at the expense of the
indigenous people (Slavs, Magyars, Jews, Gypsies). And Israel’s invasion of Lebanon, in 1982, was
primarily a campaign of extermination against Palestinian civilians and
its national leadership (death toll estimates range between about 19,000 and
30,000), much like the extermination campaigns run by the Nazis in
conquered European states.

14. In both cases, Nazi Germany and Zionist Israel, the official
doctrine of ethnic-supremacy would create eternal conflict with all
neighboring countries, and much of the world, until such time as the
neighbors were totally crushed and dominated and the unwanted
ethnicities and religions
wiped out or driven far, far away.

15. In both cases, much of the world would stand by, trying to profit as
much as possible from the early “success” of a highly unified and
officially racist doctrine, as it massacred tens of thousands of less
favored ethnic types – until the danger got way too far out of hand and
nuclear combat
became inevitable.

To reiterate:
*In both Nazi Germany and Zionist Israel, the official doctrine is one of
ethnic-supremacy, the Master Race and the Chosen People.

*The Nazis declared the “Germans” a distinct ethnicity and race,
superior to others, the Master Race and sought to make “Germans” into an
ethnically and religiously homogenized homeland.

*The Zionists have declared “Jews” a distinct ethnicity, a distinct
race, superior to others, the Chosen People of God and are trying to
make the “Jews” and Israel into an ethnically and religiously
homogenized homeland by driving the Palestinians, the original
inhabitants, out.

*Both Nazis and Jews sought to create a larger socialist state where their are “special ethnic rights” for the favored people.

*Both Nazis and Jews seek to purify their race. In Hitler’s Germany
there were marriage laws and in Zionist Israel state pays Rabbis of
the fundamentalist Orthodox Judaism not to recognize marriages outside
Orthodox Judaism.

*In Israel it is against the law to try and convert anyone.

*The Nazis sought to create “lebensraum” or living space in Poland
and the lands east to the Urals moving German settlers into the lands
previously occupied by eastern Europeans.

*The Jews are seeking “lebensraum” in Palestine and claim that all
the lands from the Nile in Egypt to the Euphrates in Iraq were promised
to the Chosen People by their God. The Zionists have moved settlers into
lands previously occupied by the Palestinians (though now they are
moving back out in some areas).

*Both Nazism and Zionism chose simplistic, ancient religious symbolism in order
to rally the race and carry out a policy of ethnic conquest and ethnic
cleansing.

*Just as Nazism was German national socialism, Zionism is Jewish
national socialism wrapped in a theocratic garb. Both are based on a
mythic interpretation of history, i.e. the Chosen People, the Master Race.

*In 1939 Germany invaded Poland and created the Warsaw Ghetto. In
1967 the Jews seized what are now the occupied territories in the West Bank and Gaza and created
ghettos for the Palestinians with their Apartheid Wall and blockades
around Palestinian villages.

*Just as the Nazis built up illegal weapons in their preparations
for war, Israel today has built up to 400 nuclear weapons and has refused
to acknowledge them or sign the nuclear non-proliferation treaty (NPT).

*Like the Nazis the Jews have had their racial scientists such as
Elias Auerbach who wanted Jews to be “politically autonomous, culturally
whole, and racially pure.” and Aron Sandler, Felix Theilhaber, and
Ignaz Zollschan. Though Jewish organization here in the United States
have historically supported unrestrained immigration into this country
in Israel they practice the racial policies of the Nazis.

*Both Nazism and Zionism created conflict with neighboring countries
and sought to dominate them and drive out unwanted ethnicities. The
eastern Europeans who were considered sub-human by the Nazis and the
Palestinians? “We should get rid of the ones who are not Israeli
citizens the same way you get rid of lice. We have to stop this cancer
from spreading within us.” Rehavam Zeevi, member of the powerful
Security Cabinet and Israel’s Minister of Tourism (Assassinated in
October, 2001)

Unlike the Nazis the Jews have created a ethnic/nation that lives
within other nations and seeks to bend them to their will, giving
unwavering support for the racist theocratic state of Israel.

Our earthly kingdom will be ruled by our leader with a rod of iron. The masses will lick our feet and serve us as our slaves.”