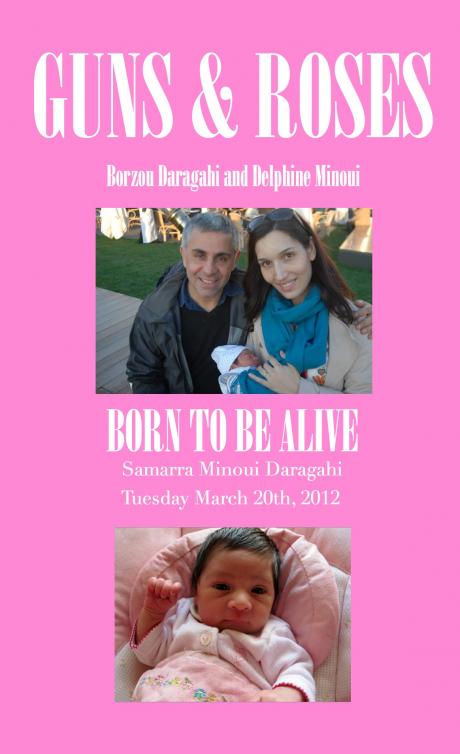 BORN TO BE ALIVE

Born To Be Alive:

Delphine Minoui, a recipient of the Albert Londres Prize, has been covering Iran and the Middle East since 1997. She lives in Beirut.

Borzou Daragahi  (born c. 1969) is a print and radio journalist and the former Baghdad bureau chief for the Los Angeles Times. A U.S. citizen of Iranian descent, he was a 2005 Pulitzer Prize finalist for his coverage of Iraq and led the bureau that was named a 2007 Pulitzer finalist for its Iraq coverage. He was also named a 2010 Pulitzer finalist for his coverage of the 2009 election unrest in Iran. He has covered Iran, Afghanistan, Lebanon and the wider Middle East. Before joining the Los Angeles Times in 2005, he was a freelance journalist for a number of publications and radio outlets, including the Newark, N.J. Star-Ledger and Marketplace (radio program). He covered the build-up to the 2003 U.S. invasion of Iraq for the Associated Press.

After 4½ years in Iraq, Daragahi moved on in 2007 to a new assignment in Beirut. On April 10, 2007, The L.A. Times started publishing a front page memoir of his time in Iraq. The article describes the tactics used by reporters working under potentially lethal conditions, and provides personal insight into the effects of terror and stress on those working in combat zones.