Help fund “Happenings of the Eighth Day”, an Indepent Film 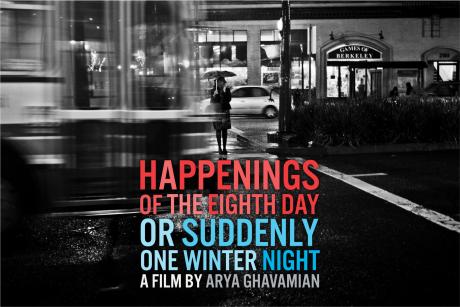 My name is Arya Ghavamian, I’m 20 years old, and since I can remember I have been in love with cinema. I went through collecting films and artwork as a teenager towards engaging myself in photography and writing screenplays. I was born and raised in Tehran- Iran, I moved to San Francisco Bay Area four years ago, and since then I’ve been actively making short films and doing photography. My photography and films have been widely featured on different media, including Voice of America, Radio Zamaneh, Iranian.com, and The Creative Book. I have made three short films, and two music videos.

I am making my first feature film! and I am raising funds for this film through “Kickstarter.com”

It is a film about an Iranian filmmaker who, during the making of his new film in America, faces the downfall of his relationship with his wife and his friends. After a while, he realizes that his screenplay is becoming his own life. He knows how everything is going to end but he still goes down the path of finishing his film. In the mean time, a mysterious organization called “The 496” is following him to prevent him from making the film.

The underlying story is the peril of Iranian filmmakers and the pressure that filmmakers like Jafar Panahi experience in Iran.

Kickstarter  is a website that allows communities to come together and help artists and innovators develop their projects by their donations. Projects get funded if they reach their goal during the time that is set for them. If the goal isn’t reached by a certain time, the projects won’t get funded and nothing will be charged from the people who have donated.

Feature films cost a lot to make. 10K is a minimal budget that will allow us to start the shoot, but we actually need double the amount to cover our costs during the post-production and the distribution of the film.

Please check out the link to the campaign for the film and please donate and spread the word for it. We have already come a long way with the support of amazing people like you. Help us finish strong! Let’s raise 20K !