Persian Gulf Cosmopolitans & Emirati Fences: The Life and Times of the Iranian Souk 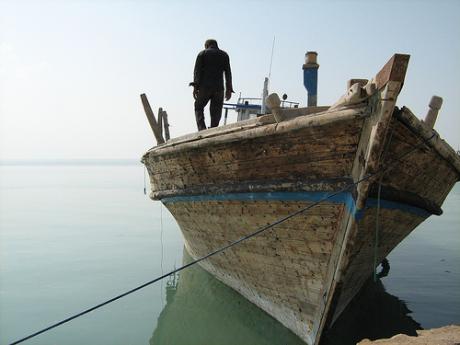 As the standoff between Iran and the United States enters into a new, more aggressive phase of crippling sanctions punctuated by threats of war, the Arab oil sheikhdoms to Iran’s south have increasingly collaborated with US efforts to isolate Tehran. Increasingly, the Persian Gulf has been represented as a geopolitical powder keg with distinct cultural and ideological divisions separating the northern and the southern shores. This strategic body of water, which serves a locus for the global energy trade, has been politicized and militarized by the littoral states and by a U.S. naval presence. The current socio-political environment has promoted a set of dichotomies between the two coasts. The Northern shore has been identified as Iranian, Shi’a, and fundamentalist, the Southern shore as Arab, Sunni, and a bastion of U.S. strength.

While these divisions seem to be built along straightforward cultural lines, a closer look reveals that Iran and the Gulf Arab states have a much more complex and interconnected historical relationship. the United Arab Emirates, for example, has deep economic and cultural ties with Iran due to hundreds of years of mutual naval trade and settlement. While the upper echelons and political elites of Iranian and Emirati society tend to view issues pertaining to the Gulf through a nationalist lens, merchant communities and fishermen have traversed these arbitrary demarcations for centuries, creating extensive familial and business networks that transcend ethnic, linguistic, and national barriers.

for the entire article, please visit: