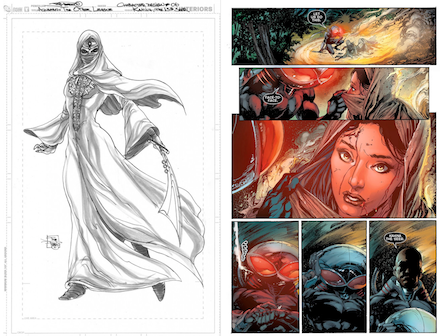 First, a bit of background for those of you who don’t follow superhero comics: a couple of weeks ago, DC Comic published Aquaman #7, written by Geoff Johns, one of the most prominent and popular writers in the superhero genre, and Chief Creative Officer at DC Comics. In it, he introduced a brand new superheroine to the DC universe by the name of Kahina the Seer. On page 1 of the comic, we see her running for her life from Aquaman’s mortal enemy, Black Manta. She puts up a good fight, but by page 7, she is defeated. On page 8, we find out that she’s Iranian. And yes, she’s also killed off. What follows is an open letter to Geoff Johns, adapted and slightly reworked from a similar note I sent to the book’s editor, Pat McCallum.

After reading Aquaman #7, I felt the need to share my thoughts on a topic close to my heart. To that end, allow me to very briefly share my background with you: I’m an Iranian-American writer, a lifelong fan of the medium of comics, and a big fan of the DC characters. I have over 10 years of published works to my credit, from self-published stories to comics and graphic novels from Dark Horse, Image, IDW, and DC Comics. My DC Comics contribution was a Spectre story set in Tehran, Iran, for the DC Universe Holiday Special 2010 #1, edited by Mike Carlin.

Needless to say, when I saw that a new superheroine introduced in Aquaman #7 was an Iranian woman, I was very excited. As far as I know, the only other Iranian character in the (pre-52) DCU was the villain Rustam (who, ironically, was named after the most famous and popular HERO from Iranian literature). So you can imagine my frustration and extreme disappointment when this new hero, Kahina, was summarily killed a mere 8 pages after being introduced!

Please understand, this is not one of those “DC Comics is racist/xenophobic” essays that you’ve undoubtedly encountered countless times in the recent past. I’ve been happy with, and supportive of, DC’s attempt at diversifying their universe with a sizable number of comics starring minority and female characters in the “New 52″ relaunch of books. But I just don’t understand the logic behind creating a new minority hero – one from a country and culture that’s often misrepresented in today’s media as “evil” – only to have her killed upon her first appearance. What purpose did her death serve, other than being a mere plot point?

In doing so, you deprived your readership of a character utterly unique by virtue of her ethnic background, a character different than the thousands of others in the DC universe. Imagine the new storytelling venues opened up to you and other DC writers, had this character been allowed to continue her adventures in your fictional universe. With Iran in the news cycle as of late, here was a chance to add an element of verisimilitude to DC Comics, and start something bold and unconventional.

I’m not asking that DC Comics create a plethora of Iranian characters, or that they should only be portrayed as heroes, or even that once created, they should never be killed. I understand narrative needs, primary characters and supporting ones, emotional beats and motivation. But when there are absolutely NO characters of a certain ethnic or cultural background in your stories, to casually kill off the ONLY example of one, after a mere 8 pages, seems very counterproductive to me. It’s a disservice to your audience, a step back in your strides towards diversity, and just reinforces the negative stereotypes about the stunted development of superhero comics. And not to mention regressing back to this

I know that because of my background, I’m much closer to this situation than the majority of your readers, but I don’t feel that invalidates my thoughts on the matter. Embracing multiculturalism not only offers a wealth of new storytelling possibilities, but it also distinguishes them from the hundreds of other alternatives in the marketplace, and opens them up to a wider marketplace.

I hope that you will consider my thought on this topic in the spirit that they were written: not to condemn, but hopefully to illuminate.