What the Odyssey can tell Egyptians 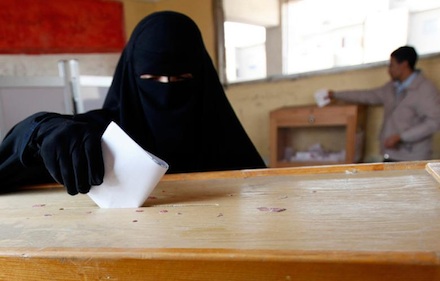 In the Odyssey, Homer has Ulysses barely make his escape through a strait guarded on one side by the monster whirlpool Charybdis and on the other by the cave-dwelling hydra Scylla. Ever since, the expression “being caught between Charybdis and Scylla” has meant the impossible proposition of choosing between two evils.

This is what is happening now with the looming Egyptian presidential elections. On the one hand, the Muslim Brotherhood reneging (no surprise there) on its word not to present a candidate and naming Khairat El-Shater as their choice (he has been quoted as declaring that establishing sharia law is his “ultimate goal”.) On the other, as a possible counterweight, the now declared presidential bid of Omar Suleiman, a former army general and intelligence chief. The smattering of other candidates will not make a difference.

The Egyptians are left with not much of a choice. It’s either Charybdis and stricter application of Islamic law or Scylla, the secular but repressive dictatorship of yet another general. If they vote for the Brotherhood, they will have to accept a moderate Islamic state, except that there is no such thing. The French-Algerian journalist Mohammad Sifaoui, a secular Muslim himself, brilliantly demonstrates that there is no moderate Islamic state as there is no moderate Islam. Case in point, Prime Minister Erdogan’s AK Party in Turkey, which has managed to have Islamic law, in one guise or another, seep into every aspect of Turkish life, gradually destroying Ataturk’s secular legacy. Erdogan will be pulling a Putin in the next presidential elections, running—and certainly winning—while grooming the present president, Gül, also an Islamist, to replace him as prime minister. With two mandates, that’s Turkey for the next ten years, at the end of which it will no doubt have turned into a rigid Islamic state.

But back to Egypt. If Egyptians elect Suleiman instead, there’s bound to be a crackdown on the Brotherhood such as the movement has known throughout presidents up to Mubarak’s overthrow.

Like many people, I was hopeful, at the start of the Arab spring, that the people would achieve what Iranians couldn’t obtain in 2009—bring to power a more palatable government and have a say in the way their countries are run.

Given the present mess in Egypt, Libya, Yemen, not to mention Syria, given the establishment of a “moderate” Islamic regime in Tunisia, given the entirely predictable rise of the Muslim Brotherhood in Egypt, I don’t see much cause for optimism. The only reason to still hope is that, over the last couple of centuries, the trend of history has, with some hiccups, gone into the direction of more liberty. Western democracies, so reviled by governments such as Iran’s, are well established and functioning, despite the problems and woes to be expected in an open society, while the awful dictatorships and repressive regimes elsewhere will fall. They may be replaced for a while by similar ones but they will fall.