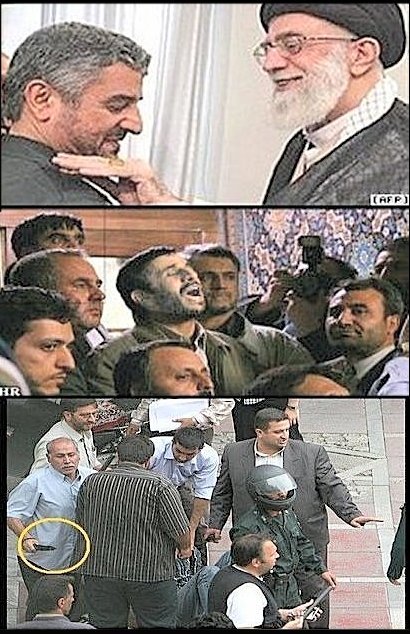 During the last three decades of the Islamic rule in Iran, hooligans and thugs, who were situated in the lower layers of the power pyramid, gradually pulled themselves up and now are in competition with the religious officials for the complete takeover of power. In the first decade of the religious government, thugs and hooligans played the role of repressive security-military forces and pressure groups. But in the second decade, this role was extended to a widespread economic power and now, at the end of the third decade, the expansion of this network to a giant and powerful political-economic and military mafia is very well established.

Thugs and hooligans have always been positioned on the third highpoint of a triangle, whose two other highpoints were religious officials and political power-holders, and each of these highpoints was struggling for a base of popularity in the society. The history of the political participation of lumpens in the role of pressure groups goes back to the Safavids’ political-religious rule and then to the Constitutional movement when the Sangelach and Chāleh Merydān thugs [of Tehran] formed a mob, which included other groups, and walked to the front of the Parliament and chanted:

“We want the prophet’s religion; we don’t want Constitution!”

Then, the thugs went to meet Sheikh Fazlollah Nouri and Hāji Mirza Aboutāleb Yazdi and other religious officials who were against the Constitution. They went to the Toopkhāneh Sqaure in the company of these religious officials and, while raising uproar, began to slaughter people.(1)  As mentioned in the first part of this write-up, the obvious example of how the three triangle highpoints complemented each other is in the August 1953 coup d’état. But the events after June 1963 demonstrated that the social and traditional ties between the religious officials and lumpens is stronger.

4) evading from the law,

6) believing in the strategy of terror and fear and taking complete vengeance on others, and

It is natural that extensive layers of the Iranian traditional and religious society of that time, whose influential segments were some groups of bazaaris (traditional middle-class merchants) and the urban marginalized, were associated with these traits.

Ruhollah Khomeini, who claimed a mission for the poor, was giving the address, but it was not the right one. This meant that his mission for improving the lives of the ‘economically poor’ was not successful, and instead it resulted in benefiting the pockets of the ‘culturally poor’ and lumpens. To maintain the security of the Islamic State, club-bearing groups were gradually formed in the villages and cities neighbourhoods by the Mullahs. The distinction between the Islamist fanatics and lumpens in the governmental club-bearing groups in the beginning of the Revolution is often very difficult, because of their similar behaviours. Club-bearing gangs, who suppressed the government’s opposition in the early years after the Revolution, were an amalgam of these two groups who had many behavioural and cultural similarities. The difference between the two was that the Islamists were performing hooliganism out of religious belief and fanaticism, while the lumpens were doing it out of instinct and opportunism, but the result has been the predominance of lumpenism.

One of the famous leaders of the street hooligans in the beginning of the Revolution was Hādi Qaffāri who was very active in the suppression of the students during the uproar of the Cultural Revolution and the suppression of the political oppositional groups. One of the slogans of these extremist groups, who called themselves ‘Hezbollah’, was: “My dear Khomeini, tell me to shed blood”(2). These ideological or social classist hooligan groups were gradually absorbed in the Islamic government’s military, security and judicial forces. This write-up will specifically focus on the background of hooliganism in the Basiji force, Sepāh (Revolutionary Guards) and police force.

Seyyed Ali Khamenei, the current leader of the Islamic Republic, had a special interest in security and military affairs and always had positions in this area since the beginning of the new regime. After Khomeini’s death, he was chosen for the leadership of the government, assisted by the planning of his former influential friend, Akbar Hāshemi Rafsanjāni, and with the assistance of Ahmad Khomeini. His qualifications for promotion to the position of the Supreme Leader were seriously questioned even by the religious officials, and Khomeini’s relatives and friends and first-degree managers were also aware of his incompetence. He also lacked Khomeini’s charisma. So, in order to compensate for the deficiencies in his religious and political legitimacy, Khamenei inevitably increased his reliance on the middle-rank security and military forces – those who would be more dedicated to him. At the same time, he began to remove and dismiss Khomeini’s kin and friends and former collaborators in order to create both an authoritative legitimacy and a new class of loyalists around himself.(3) Khamenei’s main tactic for attracting this group of loyalists as the country’s new managers has been to exploit their greed for wealth and power as a nouveau-riche class who lacked culture(4). In order to enlist the ideological numbers from among the “Basijis who didn’t go to war”, he used the strategy of religious deception and religious myth-making.

Khamenei’s policy led the Hezbollah street thugs and second level security-military forces of the 1980’s to begin their economic and cultural activities during the 1990’s, and entering the scene after July 9, 1999, practically as new competitors alongside the religious officials. With the support of the military and security forces, Khamenei brought Ahmadi-Nejād, an evil individual lacking culture, to the political scene, thus continuing his policy of restricting the status of the Islamic politicians while increasing his own, in order to garner feeling of eminence.

The Islamic Republic’s Minister of Science stated that a university opposed to the Basiji culture would be razed.(5)  Based on this statement, one can very well grasp the nature of what is known as the “Basiji culture”. At present, the Basij Organization is a governmental tool for the harassment and repression of the people on the streets, to the point of massacre. For many Iranian citizens, the title of “Basiji” is reminiscent of 14-15 year-old teenage boys who stand on the crossroads with batons or guns, inspecting, insulting and harassing the passers-by. Of course, hearing this name, some would remember children who, during the Iran-Iraq War, went to the war front line with the help of mosques and never returned. Young Basijis are usually very religious and dogmatic individuals with a single-minded outlook; they have never had the personal experience of communication with different nations and civilizations and cultures. They believe that they are at the centre of the absolute right, and further, that Imam Khamenei is the centre of the universe and all the planets and solar systems turn around the Leadership House. Based on their imitative teachings, they consider hooliganism to be the guardianship-oriented ritual.

‘Basiji culture’, which has been, and is being, promoted by the Islamic State, has indicators such as appreciation of guardianship,  promoting virtue and preventing vice, religious zeal and holy anger. Exact equivalents in the lumpens’ culture are: being a devotee of the elite, invasion of privacy and interference in the lives of others, inquisition, and seeking violence. This means that the ruling elite, using religious definitions, has theorized the development of the lumpen class and adopted this class, calling it “Basiji Culture”.

Here, it is appropriate to dig a tunnel to the history and have a second look at the formation of the Revolutionary Guards and Basijis. The Revolutionary Guards of the Islamic Revolution (the IRGC), supported by Khomeini and extreme Islamists, was established on April 22, 1980, in an effort to protect the interests of an ideological Islamic State. Contrary to the Iranian military, safeguarding national interests was not, and is not, the duty of the Sepah (the IRGC). The organization for the mobilization of the oppressed (mostaz’afān) was also founded on November 25, 1980, on the order of Khomeini with the aim of organizing people who supported the Islamic State. The Mostaz’afān was put under the supervision of the Revolutionary Guards. During the War with Iraq, the IRGC and consequently the Basij gradually became the focus of attention.

During the first two years, the Iranian’s greatest national victory in the war with Iraq, in the liberation of Abadan’s blockade and then the retaking of Khorram-shahr, was obtained with the army commanders’ management. Of course, in this patriotic battle, many popular forces (the militia) and Revolutionary Guards made sacrifices and died as well.(6)  But during the remaining six years of the War, which had lost its patriotic aspect and had turned into the State ideology of reaching Jerusalem by the way of Karbala, the strength of the Revolutionary Guards gradually increased. However, the IRGC commanders did not have the military education and discipline; their only effective tactic for advancing in the fronts was to use a wave of infantry which made for heavy human casualties in every small victory. During those six years, these forces put their lives on the line to maintain the State’s ideological interests. The duty of the Basij, during the war years, was to provoke the religious feelings of the society’s children and adolescents and to drag them to the war fronts. During that period, the Islamic regime distributed plastic keys to heaven among the children; they had also employed horse-riders who sometimes appeared in the role of the Shiite’s Imam Mahdi on the camps’ horizon to strengthen these children’s readiness for martyrdom.

With the acceptance of the Resolution, put into place by Khomeini, the Revolutionary Guards and Basijis, who had paid a high price for advancing towards Jerusalem, saw everything as being lost and thus, were exposed to severe trauma. A group of these Hezbollahi forces became the creditors of the Islamic State and expected the society to pay for their failure. This, of course, was considered a ‘threat’ to the rule of the religious officials. Hence, the government decided it had to transform this threat into an opportunity. After Khomeini’s death, Khamenei’s perpetual illusion focused on the need to fight against the middle-class culture and urban civilization as the ‘enemy’. His reliance on military forces, led to the introduction of a new front for Basijis and Revolutionary Guards in the cities. In the early 1990s, the Bsij in collaboration with the IRGC and Intelligence forces formed a club-bearing group called ‘Ansār of Hezbollah’, whose branches extended from within the University Basij to governmental offices’ security. During this period, their task was to attack cinemas, cultural and recreational centres in order to beat students and ordinary people in the hopes of preventing cultural invasion.

The transfer of scientific and economic benefits to the Ministry of Information, IRGC, Basij and Committee officials, began in this period as well. Also the granting of inappropriate military gradations in the Revolutionary Guards and police, the bulk distribution of doctoral degrees among individuals such as Dr. Hosseinollah Karam, Dr. Mohsen Rezāei, Dr. Hassan Abbāsi and the like, and more importantly, the granting of outstanding economic advantages like the monopoly of national wealth to billionaire commanders, such as Sādeq Mahsouli, took place within the scope of this framework.(7)