Mujahedin (MEK) is everywhere! And they are amazing! 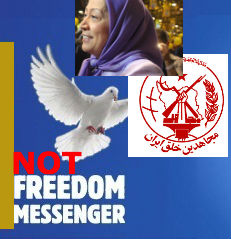 Looking deep through the web online, both the farsi and English iranian community brings me back to the memories of pre-revolution/early post-reovlution Iran. It brought me back to the days when every political organization were seeking to recruit people to their cause. Back then one of the most popular and fastest growing groups with amazing organizational skills were Mujahedin. They were recruiting people in 100s and 1000s to their cause. Anyone remembers the sigh up sheets? Back then many of us were young,  hot headed ready to destroy by any means the Shah legacy. How many poor soles were lured into the Mujahadin trap I have no idea.

Fast forward to 2012. This is e-Mujahedin. This is now. Over the years Mujahedin, under the guise of human rights and democracy have amassed a massive network of robots who do their bidding. From news websites, to blogs, to twitter, they are everywhere! And they are inter-connected. All you have to do is follow their trail from user to user. And the trail almost always ends up with someone praising and promoting Maryam Rajavi. On twitter, all you have to do is follow who they follow, which websites they link to, the tone and language in their activism. On Balatarin, all you have do to is follow the stories they push to the front page, follow the users who band together to promote a story to the front page or remove a story that is counter to Mujahedin propaganda from the front page, etc etc.

The golden days of 2009 uprising saw a massive rise to the user generated news and media content from both inside and outside iran. Alot of them genuine democracy and human rights supporters but some with clear agenda behind their group. One of them namely freedommessenger started up with their facebook and youtube channel. at first glance you would not know that this is a mujahedin founded news website/content provider. You have to look through the users, news stories, the links they publish,  to know their true agenda. Since then, they have amassed a network of 1000s of fans on facebook who read and consume what they publish online everyday.

MEK/Mujahedin has networked their way in to the top! To politicians, to news persons, to TV personalities, everyone! On twitter they are connected and constantly push their side of the story to news/political persons who use twitter. On twitter, on youtube, on link agrigating websites like Balatarin, they have a massive army at their disposal and they are ready to strike when the time is right! and the time is now. the first rule of any political organization is to lure in as many people as they can.

30 years ago, Mujahedin marxist group used gorilla tactics to fight for their cause to destroy their opponents.  Today they do the same but online. Through comments, through blogs, tweets… and they are only getting better! Unless the Iranian online community fights back with their own true organization that bows to no Rajavi, to no Mullah, to no regime figurehead, that has no hidden agenda.  A community that bows to democracy and human dignity only!