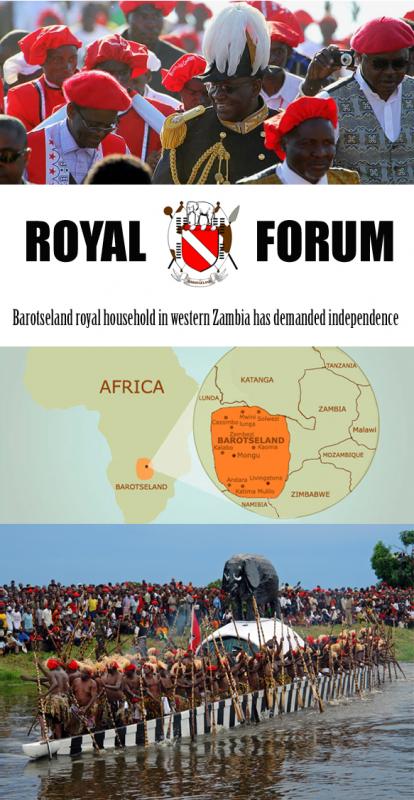 The Barotseland royal household in western Zambia has demanded independence, accusing the government of ignoring a 1964 treaty. Barotseland, was a protectorate under British colonial rule and became part of Zambia at the country’s independence in 1964. (See Related News)

47th Independence Day of Zambia, of what was then Northern Rhodesia from Britain in 1964. Joining ABN’s Lerato Mbele on the line to give us the latest news on Zambian Independence and the economy is Isaac Ngoma, President of The Economics Association of Zambia.

Conversations host Harry Kreisler welcomes His Excellency Kenneth D. Kaunda, the First President of Zambia (1964-1991). President Kaunda discusses the national and international challenges he confronted as a national leader. He also reflects on his current work with NGOs in the global fight to fight disease, poverty and inequality. Series: “Conversations with History” [1/2007] [Public Affairs] [Show ID: 12102]

The Barotseland royal household in western Zambia has demanded independence, accusing the government of ignoring a 1964 treaty.

Barotse Ngambela, or Prime Minister, Clement Sinyinda told the BBC that successive Zambian governments had failed to honour the deal for the kingdom to enjoy autonomy.

The government has denounced the call as treason.

Barotseland, the kingdom of the Lozi people, was a protectorate under British colonial rule and became part of Zambia at the country’s independence in 1964.

The area is now known as Western Province, although the BBC’s Mutuna Chanda in the Zambian capital, Lusaka, says before national independence, it also extended into other areas.

Our reporter says this is the first time the Barotse royal household has backed the calls for the region to become independent, which have long been made by activists who accuse the government of ignoring the region, which remains one of the poorest in the country.

After two days of meetings, a group of traditional Lozi leaders, calling itself the Barotseland National Council, issued a declaration

“We the people of Barotseland declare that Barotseland is now free to pursue its own self-determination and destiny. We are committed to a peaceful disengagement with the Zambian government,” it said, according to the AFP news agency.

He said that while campaigning for last year’s election, President Michael Sata had promised that the the 1964 treaty would be honoured but he had now gone back on his word.

Our reporter says that the Lozis are the most numerous people in Western Province but that the leaders of some other ethnic groups who live in the region, such as the Nkoya and Mbunda, are opposed to independence.

Last year, two people were shot dead in the main town in Barotseland, Mongu, when police broke up a meeting of activists calling for secession.