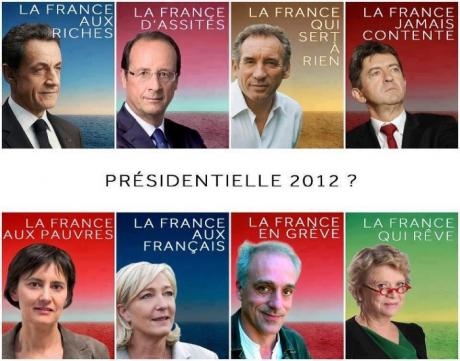 The Socialists will probably win but will they overcome the deep frictions in French Society ? For that is the real question which will haunt the French Political landscape for the years to come.

Whoever becomes President in two weeks I sincerely hope he will overcome the numerous challenges ahead otherwise France’s Far Right is bound to one day rule France just as has been the case in another European Country : Austria …

Beyond the economic challenges and political dilemmas what is at stake is the democratic future of this great nation whose motto is still:

NOT AS FUNNY ANYMORE …

John Cleese on the “Advantages of Extremism”

French Socialist Francois Hollande has won most votes in the first round of the country’s presidential election, early results show.

They suggest he got more than 28% of votes against about 26% for centre-right incumbent Nicolas Sarkozy.

The two men will face each other in a second round on 6 May.

Mr Sarkozy said it had been a “crisis vote” and called for three presidential debates before the run-off. The poll has been dominated by economic worries.

Far-right candidate Marine Le Pen came third with about 19% of the vote, ahead of seven other candidates.

The estimates – based on votes counted in polling stations that closed early at 18:00 (16:00 GMT) – were announced by French media when all voting ended at 20:00.

Afterwards, Mr Hollande said he was “best placed to become the next president of the republic” and that Mr Sarkozy had been punished by voters.

It is the first time a French president running for re-election has failed to win the first round since the start of the Fifth Republic in 1958.

Mr Sarkozy – who has been in power since 2007 – said he understood “the anguish felt by the French” in a “fast-moving world”.

He called for three debates during the two weeks to the second round – centring on the economy, social issues, and international relations.

He said he felt confident ahead of the run-off and called on French people to rally behind him.

Turnout on Sunday was high, with more than 80%.

Ms Le Pen, who leads the anti-immigration National Front, achieved more than the breakthrough score polled in 2002 by her father and predecessor, Jean-Marie Le Pen, who got through to the second round with more than 16%.

After the vote, Ms Le Pen told jubilant supporters that the FN’s result was “only the start” and that the party was now “the only opposition” to the left.

Leftist candidate Jean-Luc Melenchon, who was supported by the Communist Party, came fourth with almost 12%.

Centrist Francois Bayrou, who was hoping to repeat his high 2007 score of 18%, garnered only about 9%.

Wages, pensions, taxation, and unemployment have been topping the list of voters’ concerns.

President Sarkozy has promised to reduce France’s large budget deficit and to tax people who leave the country for tax reasons.

The Socialist candidate has promised to raise taxes on big corporations and people earning more than 1m euros a year.

He also wants to raise the minimum wage, hire 60,000 more teachers and lower the retirement age from 62 to 60 for some workers.

If elected, Mr Hollande would be France’s first left-wing president since Francois Mitterrand, who completed two seven-year terms between 1981 and 1995.

If Mr Sarkozy loses he will become the first president not to win a second term since Valery Giscard d’Estaing in 1981.