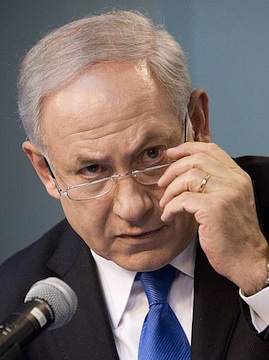 After winning the Kadima primaries on March 27, Shaul Mofaz gave his first television interview as head of the party. He immediately started attacking Israeli Prime Minister Benjamin Netanyahu, especially his policies and statements regarding Iran.

“[Netanyahu] wants to create an image that he is the protector of Israel,” stated the Iranian-born Mofaz. He then went on to describe Netanyahu’s Iran policy as not just “spin,” but worse. Mofaz warned against an early attack on Iran, which he said could be “disastrous” and bring “limited results” in terms of curbing Iran’s nuclear program.

Nevertheless, the criticism to which the Netanyahu Iran policy has been subjected recently is unprecedented in Israel. This is especially true with regard to the opinion that a nuclear-armed Iran could bring a new Holocaust upon the people of Israel. Netanyahu constantly threatens to attack Iran, which according to his government is not within the coming months but is also not “years away.” There have also been numerous hints that Israel under Netanyahu may not wait for the United States and attack Iran single-handedly.

There are a number of reasons behind the recent domestic backlash.

First and foremost are public statements by former heads of the Mossad. Ephraim Halevy, who dealt with the Iranian nuclear file for many years, has publicly stated that Iran poses no existential danger and that “Ultra-Orthodox radicalization poses a bigger threat than [Iranian President Mahmoud] Ahmadinejad.” Listening to the opinion of such a qualified and experienced expert, the Israeli voter starts to doubt Netanyahu’s claims that a nuclear-armed Iran could create a new Holocaust.

Then there is another former head of the Mossad, Meir Dagan, who according to the Christian Science Monitor “knows more about Iran’s nuclear program than just about anyone, because it was his job to stop it.” His statement that “attacking Iran is the stupidest thing I have ever heard” and that a pre-emptive Israeli strike this year would be “reckless and irresponsible” has cast doubt on Netanyahu’s constant threats to attack Iran.

Last year’s massive protests in Israel have also had an impact.

Four hundred fifty thousand Israelis poured onto the streets of Tel Aviv on September 4 to demand social justice at home. However, the Netanyahu government seems to be focusing far more on Iran instead.

This has created the impression for some of Netanyahu’s rivals that he is using Iran to divert attention from domestic issues. This has damaged the credibility of Netanyahu’s concerns with regard to Iran. It has also created an opportunity for rivals such as Mofaz. In fact, in the same interview soon after his election, Mofaz accused Netanyahu of using Iran as a tool to divert attention from last year’s social protests.

Netanyahu is aware of such attacks. At this year’s Holocaust memorial on April 18, he hit back by stating: “Those who dismiss Iran’s threats as exaggerated or as mere idle posturing have learned nothing from the Holocaust.” He then went on to describe how Zev Jabotinsky, the leader of the Beitar movement (who warned the Jews of Poland of the looming Holocaust), faced similar challenges in telling the “uncomfortable truth.”

To Israel’s citizens, the threat posed by the Iranian regime is not a fantasy, nor purely a theoretical one.

Some of the main streets of Tel Aviv and Jerusalem are dotted with memorials to hundreds of Israelis killed by Hamas suicide bombs, which were financed by Supreme Leader Ali Khamenei’s regime. There is also the regime’s denial of the Holocaust and calls for Israel’s elimination by Ahmadinejad, as well Khamenei’s insistence that the regime is not only against the government of Israel, but also against its people, whom he has publicly described as “usurpers.”

No one in Israel wants to see this Iranian government armed with a nuclear bomb, including those who do not believe that it would be an existential threat. This is one risk to regional stability that everyone can do without.

At the same time, there is valid reason for Israelis to be concerned about the consequences of Netanyahu’s Iran policies and narrative. His government’s constant warning about an impending Holocaust hurts Israel and helps the Iranian regime. Such a narrative makes Israel look far weaker than it really is, while making the Iranian regime look stronger than it is.

In Iran, Ahmadinejad is seen as a bumbling, toothless politician who is on his way out. Conversely, in Israel, the Netanyahu government speaks about him as an all-powerful politician who is in charge of the nuclear program. Ahmadinejad would pay for such endorsement in Iran, but no one would give it to him. In Israel, he is getting it for free.

The same goes for Khamenei. He is simultaneously portrayed as having ambitions to build a regional empire, and leading a suicidal regime. When is the last time someone wanted to build an empire so that it could commit suicide? Those who want influence abroad gain power because they want to maintain and increase their influence, not because they want to lose it in a ball of fire. History has shown time and again that when it comes to its own survival, the Iranian regime is not willing to take risks, especially not for Palestinians.

With the topic of Iran increasingly becoming a domestic issue in Israel, one can hope that the more it is debated, the more logic and rationality is injected into what is a very important conversation for Israelis to have.

AUTHOR
Meir Javedanfar is an Iranian-Israeli Middle East analyst. He teaches the Contemporary Iranian Politics Course at the Interdisciplinary Center (IDC) in Herzliya. He tweets as @Meir_J.