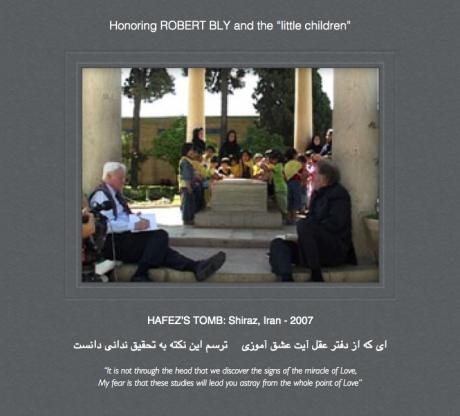 ROBERT BLY – Amerian Poet:  inspired my Blog today. He is an incredibly poetic soul, and I recommend digging up his work and his interviews – there are a few gems on YouTube, too. He also translates poetry and in 2009 translated a collection of 30 of Hafez poems, titled: “The Angels Knocking at the Tavern Door.”

In a 2007 interview with Bill Moyers (award winning US journalist and public television broadcaster), Robert Bly recalls his visit to Hafez’s tomb in Shiraz, and witnessing school children at the grave. I’ve posted this segment of the interview below. How Robert Bly champions having poetry and literature enter our hearts vs. our minds in say, graduate school  when we “study” literature. Those who create art, whether it is to write, paint, or compose music, will also tell you the process is very different to “studying” these arts.

HAFEZ: always gets the importance of accessing Eshgh/Love via your heart, rather than your mind. And all of these arts, require the conduit of the heart as a passage to their creation. In today’s Beyt, Hafez is reminding us of how “Love” is not something to be known, to be studied from the book of the mind. It resonated beautifully, with the few words Robert Bly had to say about taking children, creatures with open hearts, to the tombs of poets, rather than leaving the poets to dusty halls of graduate school and academia, to be peered into and “studied.” That isn’t the door the poetry enters the soul and sharing with you a PHOTO: Robert Bly and the “little children” at the Tomb of Hafez, 2007

Bill Moyers: You went to Iran a few months ago. Tell me about that.

Robert Bly: Yes, they flew us to Shiraz where Hafez’s grave is. So, we got up in the morning, and went to the grave. And about 8:00 in the morning, you know, children started to come. Maybe third grade children. And they stood around the little tomb and sang a poem of Hafez’s. Really charming. And then they went away, and now some fifth graders came. And they stood around the tomb and sang a poem of Hafez. … So, I said to myself, “Isn’t that unbelievable? And why don’t we do that ? Why don’t we go to the grave of Walt Whitman and have children come there? Do you understand what it is?

Robert Bly: Because we don’t love — we don’t bring Walt Whitman and love him in the way that the Iranians bring in their poets and love them. So, that’s be great if children could go to Walt Whitman’s grave and recite little poems.

Bill Moyers: What do you think it would mean if we went to the graves of our poets?

Robert Bly: You’d bring the poets into the heart, instead of having them in your head in graduate school. And that’s what you do with children. You bring chldren in and they get associated with the heart when they’re very small, and then they can feel it all through their lives.

Finally, I do know that with most of us, the seeds of “poetry” were indeed planted in us at a very early age. I remember listening to recordings of Shamloo reciting Hafez in our home, when I was around 9 and  clueless as to what was being said. But the recordings never failed to leave me in  a state of trance that I later visited and re-visited in my adult life. So, in my own case, indeed – the child’s open heart can indeed grasp, even if not fully not understand, the magnitude of the beauty. And what a wonderful place to start poetry, childhood.