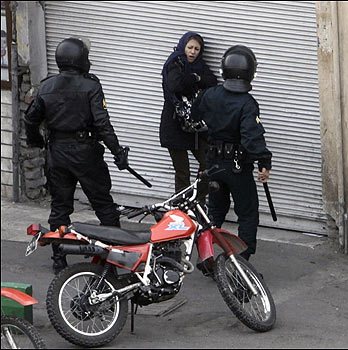 It always baffles me to see an Iranian woman who supports the IR.  How could you, after everything that the IR has done to make Iranian women official second class citizens?  Bruce Bahmani had a good blog some time ago highlighting the disparate treatment of women in Iran.   But still, after 34 years of open discrimination against women, a compulsory dress code and its violent enforcement, why would any Iranian woman support, let alone advocate for this regime?

Yet we see it all the time.  Just look at Iranian.com.  This is the latest one.  Mindlessly parroting regime propaganda about “neocons” etc., beating the Mossadegh dead horse and fomenting more anti-Americanism which has been the regime’s most formidable survival technique for the past 34 years–and even trying to make a whole film about it!  Is she that brainwashed?  Was she not forced to wear a headscarf under the threat of this happening to her?  Does she not know that she’s advocating against her own interests?  This kind of thing reminds me of the dirt poor in the South, here in the U.S., who tears themselves up to oppose Democratic initiatives that help them the most (such as universal health insurance) just because the Republicans are supposedly against abortion.  The Iranian version of these idiots are women who support or appease the IR—against their own social, political and legal interests—just because the IR yells at the U.S. once awhile.

The motive and mindset of some of these characters can easily be explained.  Like this one for example.  She’s just a hopeless America hater who doesn’t live in Iran and can barely speak Farsi.  Same goes for this character, although her Farsi is a bit better.  But what about a young Western educated woman who has seen women’s emancipation in the West?  Why would such a person advocate, wittingly or unwittingly, for the Islamic Republic and regurgitate their stale propaganda?

Is it a cse of inferiority complex and self heate?  They get exposed to a male dominated society and react by adopting the mentality and hating themsleves for having been born with the “wrong” organs?  Or is it a case of Stockholm Syndrome for the vast majority of them.  Seriously, that’s the best explanation.  Some people just seem to be susceptible to it more than others. We just seem to have way too many of them for this to be an anomaly.  Just like IC.  A lot of regime supporters—or at least appeasers—seem to be females.  And by appeaser I mean the “leave the IR alone–it will just reform itself—everything is the neocons’ fault”—type characters.

I wish though for one of them to come out and just explain, point by point, how she can reconcile her support of the regime for every single act of injustice against women in Iran.  Every single point must be addressed though.  From custody issues to the dress code, to inheritance laws, I would like them to address them point by point.  I’m not optimistic that I will get a response.  But I keep hoping…

PrevPreviousنقی کیه
NextNIAC: Is meaningful civic participation and informed decision-making by Iranian-Americans possible on this site?Next