A “Persian” Iran?: Challenging the Aryan Myth and Persian Ethnocentrism 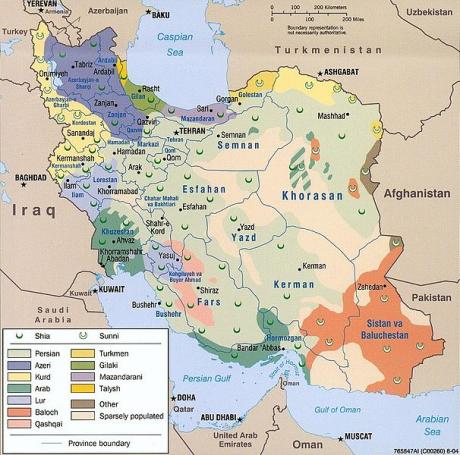 I am often confronted by the question “Are you Iranian or Persian, and what’s the difference?” and it has become something of a bonding ritual among Iranians I know to discuss the various ways in which we answer that question. For many years, I answered that there existed little difference between the two besides a political connotation, “Persian” being the adjective of choice for those who avoided any connection to the Islamic Republic. Noted Iranian comedian Maz Jobrani, similarly, points to the historically alluring and exotic sound of “Persian,” as well as its connection to [Persian] cats and rugs, in order to explain why many people prefer to use this word instead of “Iranian.”

This worked pretty well for me until the day I met a young Iranian-American of mixed Azeri-Bakhtiari Iranian heritage. While flippantly describing us jointly as “Persian,” I was pointedly informed that besides the language she spoke and a mainstream Iranian culture we shared, there was not much “Persian” about her. I had been describing myself and other Iranian-Americans I knew as Persian not merely because it was convenient, but in fact because we were Iranians of Persian ethnicity. And this was the day I found out that Iran is not, in fact, a wholly “Persian” country, contrary to popular belief and the continued insistence of many Iranians.

In fact, Persians- here defined as those whose mother tongue is Persian and identify themselves as such- make up about 49% of Iran’s population, the rest being composed of Azeris, Arabs, Balochis, Kurds, Gilanis, Mazanderanis, Loris, Qashqais, Bakhtiaris, Armenians and a whole host of other ethnic groups who collectively identify as Iranians and speak the Persian language but but whose ethnic identity is other than Persian. In addition to these ethnic and linguistic minorities, there exists a host of religious minorities- Sunni Muslims, Christians, Jews, Bahais, Zoroastrians, etc- who also fit across the ethnic mosaic described above, some identifying as Persians and others not.

On some level, I had always known Iran was not a “Persian” country. I grew up hearing jokes about “Turks”– meaning Iranians of Azeri extraction, sometimes called “Azeri Turks” because of their cultural and linguistic affinities to Turkey- and noticed that I could not always understand languages I heard spoken on Tehran streets. And yet, despite this, every journalist and every Iranian I knew insisted Iranians were Persians, in the process denying the existence of 49% of Iran’s population.