The FAKE humanitarians on Iranian.com 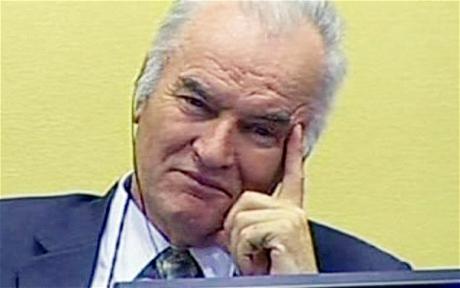 I hoped that at least someone would have entered a news article about this on Iranian.com. Not even Pendare Nik or Sosan Khanom could ignore reporting a news item of such magnitude. But they did. What could possibly explain their apathy?

On Wednesday 17th of May, Ratko Mladic, author of the greatest act of genocide on mainland Europe since the Holocaust stood in the dock at the War Crimes Tribunal in the Hague. This was a monumental moment for the families of an estimated 8,000 Bosnian Muslim men and boys in 1995 who were massacred by the invading Serb forces commanded by Mladic and Serbian President Slobodan Milosevic in an effort to destabilise the infant republic of Bosnia Herzegovina and annexe Srebrenica as part of Serbian land. It was reported that Mladic sat in the courtroom, smirking and even taunting families of the victims in the
public gallery by making throat slitting gestures. Were there any cheers or sighs of relief that FINALLY justice was being done and one of the greatest butchers in Europe was finally forced to explain his crimes?

If there ever was a litmus test to prove that the usual Pro-Palestinian on Iranian.com are not anti-Semites then they missed their opportunity. Despite their blanket but unconvincing protestations that they are anti-Israel and not anti- Jews there was a loud deafening silence in relation to the news of Mladic’s trial. This would not be surprising were it not for the fact that those who were dispossessed of their lands, stripped naked, shot in the back of their head and buried inside a ditch were ALL Muslim.

Killings and massacres of Muslims did not begin nor end in Srebrenica and many more were killed in Potocari. If this were Ariel Sharon standing in trial at the Hague for assisting the Christian Arabs to clean out the Palestinian refugee camp in Shatila and Sabra then our eagle eyed Pendare Nik (posing underThe First Ammendment) would probably be having a private celebration.

No one for a moment doubts that during Israel’s painful creation Palestinians were sadly ethnically cleansed from their villages (others were evacuated at the behest of Arab forces)  –this is sadly an incontrovertible fact that Israeli Historian Benny Morris (who is incidentally politically right wing) brought to the Israel mainstream, after a war for its survival against Arab countries hostile to her creation and Jewish migration to their ancestral homeland.

People like Mladic, Milosevic and Radovan Karadzic made Moshe Dayan and Ariel Sharon look pale in comparison in terms of their sheer brutality. If Mladic was in charge of Hanagah and Irgun then there would be no Palestinian refugee problem, No West Bank or Jenin to speak of today. East Jerusalem would be totally Judaised and the Al-Aqsa mosque would have been razed to the ground. If Mladic was in charge of the IDF by now all of Palestine from the borders of Lebanon to the Jordan Sea would have been ethnically cleansed of every Arab village, mosque and cultural identity. The entire Palestinian population would have been killed or deported. Unlike the butcher Serbs there was never any grand design by Ben Gurion and other Israeli leaders to commit genocide against the Palestinian Arabs or commit mass murder. The fact that the Zionists had accepted the original UN Mandate plan for the Partition of Palestine which would have left the Jewish state with a much smaller country speaks volumes. Had Israel done what Mladic did in Bosnia then Israel’s Palestinian problem would cease to exist today.

Whereas the 1,000,000 Palestinians and their descendants left or were transferred to neighbouring Arab countries such as Lebanon, Jordan and Syria who continue to be mistreated by their own brethren and have abandoned them to live in refugee camps to be used as a pawn against Israel, the Serbs dealt with their ethnic population problem by killing
wholesale the Bosnian Muslims, forced deportation, rape and torture to a scale  unprecedented anywhere in the last century bar the Holocaust, the Armenian genocide  and Rwanda.

So where is the outrage by the Pro-Palestinian contingency on Iranian.com? Why are they not celebrating the trial of a mass murderer like Mladic? Why hasn’t Ramin Mehmanparast or the Islamic Republic Terrorist Foreign Ministry released a statement supporting the trial of Mladic and commemorating the memory of the thousands slain Muslims? To suggest that the supposed Pro-Palestinian groupies are spurred by humanitarian grounds is patently ridiculous. They could not give a rats ass. I would go so far as to say that these people are not even Pro-Palestinian. The difference between the Serbs and Israelis is that when they were growing up their mother never whispered into their ear that the Serbs are Najis. Their mother never told them that by stading outside the rain the Najis Serbs filth would wash off on them.

The only thing that spurs on the pro-Palestinian crowd- and they know who they are- is their Jew hate. Inherited from father to son. Mother to daughter.