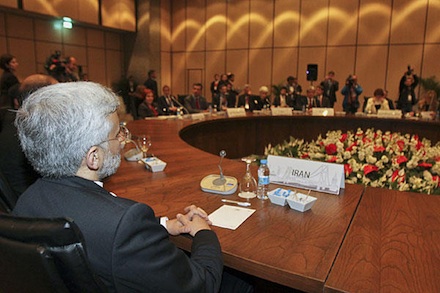 It’s hard to overestimate the degree of naiveté on the part of the West as it heads toward another round of nuclear talks with Iran in Baghdad on Wednesday.

Clearly, Iran is stalling for time to develop a nuclear weapon. One example: In talks last month in Istanbul, Tehran seems to have convinced international negotiators of the sincerity and weight of a fatwa, or religious edict, by the Supreme Leader Ayatollah Ali Khamenei that a nuclear bomb is haram – forbidden – in Islam.

The ayatollah is not beholden to keep his word, but that doesn’t seem to be of much concern. At the Istanbul talks, the West agreed for the first time to Iran’s demand that it may enrich uranium, with restrictions – despite UN resolutions to the contrary.

The Islamic regime has continuously believed that the more its nuclear program is expanded and progress is achieved, the less likely the West will demand a halt to the program – and if Iranian leaders remain steadfast in the face of all threats, the more likely the West will eventually accept a nuclear Iran.

Recent chronology bears this out.

When President Obama took office in 2009, Iran was under several UN sanctions conditioned on its suspension of all uranium enrichment-related and reprocessing activities. At the time, Iran had 1,200 kilos of low-enriched uranium at its Natanz facility.

Mr. Obama chose to engage the Islamic regime, believing that an extended hand would yield better results than threats. He reasoned that a new US approach would be welcomed by Tehran because it was a complete change from the Bush administration.

However, the radicals ruling Iran saw this extended hand as weakness. They engaged the Obama administration while enriching uranium beyond the benign 3.5 percent level, as it had been limited to for many years, to the 20 percent level. While that is not a high enough enrichment level for a nuclear weapon, it is high enough to get to bomb-grade very quickly – in a matter of weeks if Tehran decides to do so.

Early in 2010, Obama, realizing his defeat in the negotiation phase, moved to a sanctions phase. But instead of the crippling sanctions he had promised, he started step-by-step sanctions that Iran’s clerics saw as further proof of America’s inability to stop Iran, which emboldened them to speed up their program.

Today Iran, under further sanctions by the United Nations, United States, and European Union, has over 5.5 tons of enriched uranium – enough to eventually make six nuclear bombs. It continues to enrich uranium with more than 9,000 centrifuges at Natanz, both at the 3.5 and 20 percent levels, and at the previously secret site, the Fordow facility, deep in a mountain near the city of Qom, to the 20 percent level.

All the while Iran is expanding the number of centrifuges at both sites, with a possibility that there are more sites unknown to the West or the International Atomic Energy Agency.

This takes us to the current set of negotiations. In Instanbul, the West handed the Islamic regime a historic win. For the first time in the negotiations over Iran’s nuclear program, the West offered Iran full acceptance of its nuclear enrichment process if Iran stopped the 20-percent enrichment.

In other words, the West has caved to Iranian demands of accepting its domestic nuclear enrichment.

Most interesting is an Iranian analysis of Khamenei’s fatwa: “If the Obama administration realizes the importance of the place of the supreme leader in Iran and understands the fatwa, then most of their problem [with Iran’s nuclear issue] will be solved.”

The analysis ominously stated: “There will be no other guarantee beyond the fatwa to the West” – meaning that the West will only get the word of a leader whose regime has been based on lies and deceit, a leader who has ordered the slaughter of thousands of Iranians – and also Americans – in Iraq and Afghanistan, and a leader who constantly threatens the existence of Israel and the “defeat” of America.

Khamenei is not a grand ayatollah, or a marja, and therefore cannot issue a fatwa. Many in Iran’s Islamic leadership know this. He was elevated to ayatollah status overnight to replace Ruhollah Khomeini when he died in 1989. Even if a marja issues a fatwa, he can overturn it if it benefits Islam. So Khamenei’s fatwa can be tossed out at the right time.

Interestingly, the regime’s interpretation of the Quran is to deceive its enemy, i.e. the West, until such time as the regime is strong enough to confront it.

Is Obama so naive as to hang on to a fake fatwa in return for accepting a nuclear Iran?

His secretary of state, Hillary Rodham Clinton, says she has discussed the fatwa with Turkey’s prime minister, experts, and religious scholars. “If it is indeed a statement of principle, of values, then it is a starting point for being operationalized, which means that it serves as the entryway into a negotiation as to how you demonstrate that it is indeed a sincere, authentic statement of conviction,” she said last month.

According to media reports, the US is expected to push Iran to close its Fordow facility and send its stockpile of medium-enriched uranium out of the country.

Iran has ruled out the closure of Fordow, even announcing that it will increase the number of centrifuges at that facility. And so far, its strategy of expanding its nuclear program while wearing down the West has already proved successful.

It is clear that after a decade of negotiations and sanctions, the leaders of the Islamic regime will not accept a full halt to their nuclear program. But given that Iran now has the know-how to make a bomb, that is the only outcome that should be acceptable to the West.

AUTHOR
Reza Kahlili is a pseudonym for a former CIA operative in Iran’s Revolutionary Guard and the author of the award winning book “A Time to Betray: The Astonishing Double Life of a CIA Agent Inside the Revolutionary Guards of Iran.” He teaches at the US Department of Defense’s Joint Counterintelligence Training Academy (JCITA) and is a member of the Task Force on National and Homeland Security.