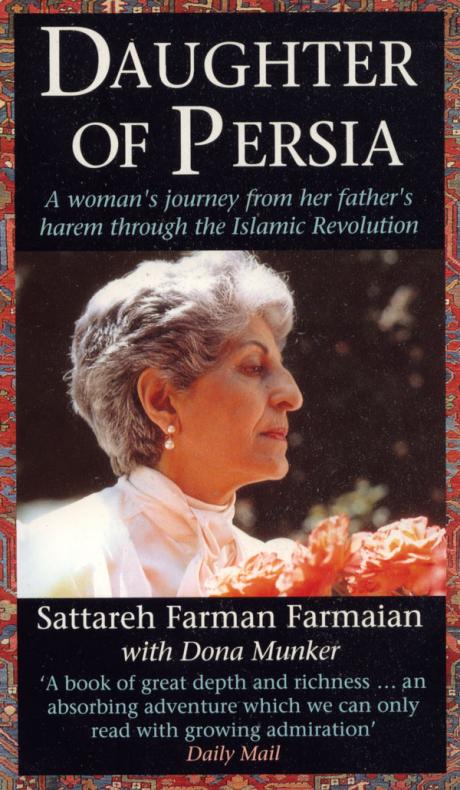 Author of Best Selling Book Daughter of Persia and one of the daughters of Persian nobleman Abdol Hossein Mirza Farmanfarma of the Qajar dynasty has passed away. (Related News Here)


Sattareh Farman-Farmaian, daughter of Abdol Hossein Mirza Farmanfarma (ca.1858-1939), prince of the Qajar dynasty, and Massumeh (third wife of eight), was born in Shiraz, Iran, in 1921, the fifteenth of thirty-six children (and third of nine children by her mother Massumeh). She had four brothers (Farough, Ghaffar, Rashid, and Sabbar) and four sisters (Jabbareh “Jaby”, Homy, Sory, and Korshid).


Farman-Farmaian attended the Tarbiat School, a Bahá’í school in Tehran until its closing in 1933 by Reza Shah Pahlavi. Beginning in 1933, she attended the American School for Girls in the Presbyterian missionary compound in Tehran, renamed the Nurbaksh School. In 1943 she was accepted to Heidelberg College in Tiffin, Ohio, obtaining a visa to the United States in 1944. That year she left Tehran, travelling through India, and first attempted to sail to the United States from Bombay, but her ship was torpedoed and she and her fellow passengers were rescued by British destroyers who returned them to Bombay. Her second attempt to leave India was aboard the United States Navy troopship, U.S.S. General Butler, arriving in Los Angeles on July 4, 1944. The following day Dr. Samuel M. Jordan (who had been involved with the American School in Tehran) met her in Los Angeles and convinced the admissions director of the University of Southern California to admit her. Farman-Farmaian was the first Iranian to attend and graduate from the University of Southern California, completing her B.A. in sociology (February 1946) and her M. S. W. (June 1948).

Sattareh Farman Farmaian, the daughter of a once-powerful and wealthy Iranian prince, was raised and educated in the 1920s and 1930s in a Persian harem compound, along with numerous mothers and more than 30 brothers and sisters. As a young woman, she broke with Muslim tradition and travelled to America, where she became the first Persian to study at the University of Southern California. Her new life in the West fired a vision to lift her own people out of backwardness and poverty, and she returned to Iran to found the Tehran School of Social Work. For more than 20 years, Sattareh and her students waged a war against poverty, disease and overcrowding, and then, soon after the collapse of the Shah’s regime, she was forced to flee the country in fear of her life. In this account of her experiences, she provides an insider’s view of Iran’s journey through the 20th century and of the events which led up to, and followed, the Islamic revolution.

Mahnaz Afkhami: A Women For All Seasons (VOA/BBC Interviews)