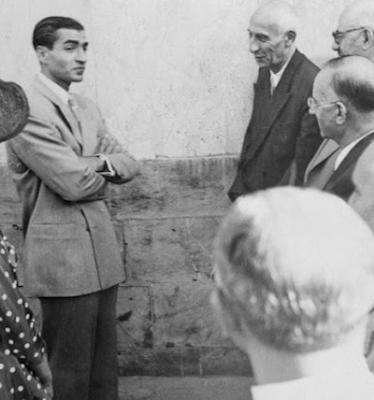 Our good friend Mr Jahanshahi wrote a blog about Dr Mosaddegh and the oil nationalisation affair. I must admit that this was a very informative blog and I personally have learned a lot as many of my questions were answered.

Also the great amount of contributions to the discussion from all sides made it a very rich blog. Although I may not agree 100% with our friend Mr Jahanshahi’s point of view, sill I believe that he has done us all a great favour by being brave enough to break another taboo and scrutinising the conduct and motives of another character in our country’s political arena. A character that for a while was believed to be unquestionable.

For a very long time the followers of Mosaddegh have attempted to put him beyond any criticism by creating a saint and a national hero out of him and calling anyone who dares to even raise a question (however legitimate) about the man, as a traitor and a servant (nokar) of  the West.

Personally I believe that in the end such people do not even give a damn about Mosaddegh, who he was, and what services he has or has not done to this country and  what errors he might have made along the way either. All they are interested in is to use Mosaddegh as just another tool in their arsenal to avoid facing the reality of their own errors and shortcomings.

You see? Culturally we Iranians have a big problem with accepting our errors and that is the main reason behind our failures over and over again. So instead of facing our responsibility, accepting our errors, learning from our mistakes and moving on, we resort to the game of heroes and villains.

So depending on our political orientation we either make a saint and an unquestionable hero of Mosaddegh or the Shah by moving them beyond any criticism and then conveniently hide behind them. Or we turn them into a Villon and blame everything that has gone wrong in our miserable lives — including our lack of a basic understanding for democracy or the right and wrong way to achieve it —  on them by playing the role of victims.

Yes you heard me right! The ROLE OF VICTIMS. Over the many years we Iranians have always played the role of victims and have become very good at it too.

Every time something has gone wrong in our history instead of being brave enough to have an honest look at our own conduct and assessing what we should or should not have done, we pulled a hero or villain from our back pocket and either hid behind them or discharged the responsibility for all our errors to them and play the role of a “helpless victim”.

However I for one am fed up with this approach and personally prefer to look into the mirror, even and especially when I do not like what I see, as that would be the only way to identify what needs to be changed. Furthermore what I dislike the most would be denying my errors and shortcomings and blame others for my own mistakes.

With regards to the Mosaddegh affairs, in my personal opinion it is as naive and short-sighted to blame him for everything that has gone wrong in our country including lack of democracy . It is stupid to make a hero-saint of him and think that he was the solution to all problems.

Anyone who knows the first thing about the reality and nature of democracy would and should know that democracy is a plural phenomenon which needs the participation of all the members of the society which is seeking it. More importantly it could not be given to or taken away form a nation as it is and should be a part of their cultural and social character. For a nation to achieve democracy they first need to think and behave in a democratic manner. They need to know their duties and rights within a civil society and be prepared to walk the straight and narrow path of social justice even and especially when it might be against their personal interest.

If a nation achieves such a status then no other man or regime however powerful and influential or brutal could not take it away from them, and the survival and flourish of democracy in Europe after WW2 and defeat of Nazism is a good example. On the other hand if a nation and a people do not understand the meaning and essence of democracy then the most glorious revolution or the most powerful armies in the world would not be able to achieve that for them, as our own cock up of 1979 and the allied invasion of Iraq and Afghanistan could be considered as perfect examples.

The walk toward democracy is a long slow marathon rather than the short run we like it to be. It is along this path that we need to learn from our experiences and understand the meaning of civil society and apply it by not separating our personal interests from the broader interests of the society we live in.

The truth is that although we have improved immensely in the past one hundred years, we still have a long way to go to achieve such a state of mind in practice (and not just by empty slogans).

People like Mosaddegh and the Shah were no different to the rest of us as they also did not understand or appreciate many aspects of democracy, civil society and social justice or national well being.

Mosaddegh thought by creating an enemy of the West, instead of negotiating for the best deal, he could resolve our problems overnight, not to mention his undemocratic moves such as closing the doors of Majless and getting into bed with the likes of the Tudeh Party who’s manifesto called for the handover of our sovereignty and turning Iran into a Soviet republic. On the other side of the equation was the Shah who believed that only material well being and improvement of people’s standard of living would be enough to take them through the gates of his “Great Civilisation” by arrogantly taking charge of everything and ignoring principals of democracy or our people’s crying appeal for freedom and even ignoring the open letter addressed to him by Dr Bakhtiar only one year before the tragedy of 1979 which we all know what that error led him and the rest of us into.

But maybe the Shah’s most fatal mistake was to repeat Mosaddegh’s error by hiking the price of oil and picking up a war with the West without first making sure that he has a nation of informed, educated and free thinking people behind him. As we all know that resulted in Guadalupe Conference and the equally short-sided decision by the West to support one Mr Khomeini and as they say the rest is history.

What both of these men overlooked and failed to address was the cultural well-being and the attitude or approach of a nation towards their own society and their will (or rather lack of it) to take responsibility for their own community or to be accountable for their own actions and most important of all to be able to listen to the opposite point of view open-mindedly and without any prejudice.

That is why in spite of their errors I still could not and would not dismiss their services such as the nationalisation of the oil industry in Mosaddegh’s case or all the social and infra-structural improvements of our country during 50 years of Pahlavi reign which brought our country and mindset from the dark ages into the 20th century.

Even today, more than 65 years after the oil nationalization affair and 33 years after the Islamic disaster of a revolution, still most of us have not learned the lessons of the past and in spite of all claims on being democratic and talking about freedom of speech, we still can see people in this site as well as in the rest on Iranian community who are as closed-minded as ever. We encounter many people who although claim to be advocates of democracy still launch personal attacks and insults on each other by using childish name-callings and making uncivilised accusations towards each other just because the person on the other side does not agree with all their points of view.

The tragic issue in all of this is that such behaviour comes not from the average illiterate fellow in the streets of Iran, but it comes from our so-called intellectuals, professors, doctors, engineers and the residents of Western democracies who are supposed to have learned the principal of democracy, tolerance and non-prejudice behaviour from their host nations.

Now! If these so-called intellectuals behave in such a degrading manner before getting into power, then I really hate to imagine how they would behave once in power.

Would it be surprising if they become the next dictators only with a different idol (Shah or Masaddegh)? If these people behave in such degrading manner now (when they have no power) then what could I expect from the illiterate mullah who is in charge now and believes he is speaking for God, or his stupid Baseeji servant who is not only paid well but also believes that by serving such morons he will also get an eternal palace in heaven.

Hasn’t the time finally come for us to learn to be fair and open-minded toward all other ideological and political groups and all different opinions even and especially when we are in utter disagreement?