Is Houla the cinema Rex of Syria? 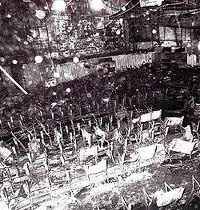 At the outset
of the 1979 Iranian revolution, in Abadan, a city in the south of Iran,
the Rex
cinema caught fire. More than 400 people were burnt alive. Political
opposition
groups immediately accused the Shah’s regime of arson. The regime, for
its
part, denied that it had played any role. But given that the Shah’s
forces had
already killed scores of protestors in Qom and Tabriz and also Savak was
known for its brutal methods, and as assaults on peaceful
demonstrators in different cities had become routine, no one could quite
believe
that the regime itself was not responsible. The incident swelled the
rank and
file of opposition across the entire country.