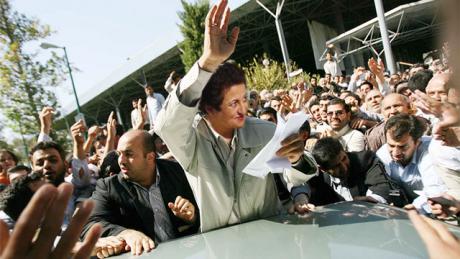 Surprising that with the upcoming Iranian presidential election, not much is being said about a possible run for the largely ceremonial post of Iranian President, by the best likely woman candidate we could field, namely Shirin Ebadi.

Don’t think I did not hear all the heavy sighs you all just expended when I mentioned Shirin-Jan. I know. I know. She won’t do anything. She has not done anything. She is trying to sell books, She’s really a dyke… I know all that. But riddle me this Batmen (and Catwomen), why the hell not?

While we may have been collectively disappointed with Ebadi’s lack of success, or any sort of sign of life post-Nobel, the possible shit that Shirin can disturb as President of Iran is nothing short of titillating to consider. Given we have little to titillate.

Certainly an Ebadi candidacy would pose possibly an uncomfortably un-answerable and possibly unstoppable conundrum for the Chippendales of Qom Brigade’s revival performance of the 1979 Aba hit song, ”Don’t Cry for Me Ayatollah”.

Note: there is a huge unfortunate but irresistible error in that last set, the first one who comments on it wins a prize. It might not be a big prize but I will do the best I can. According to MM, I am thankfully or unfortunately “not on the take” and just the son of a poor Ghashghaie shepherd so…

Yeah so, if the Supreme Pizza Chains in Charge receive Shirin’s permit to run for President of Iran, and reject and eject her permit forth-with, poste-haste, they would risk the final step towards full-infuriation of the over 50% of Iran, that you would do well not to fully infuriate. A little or as much as they have done now to at once objectify women while making that object invisible, seems to be manageable if you can summon up the least amount of denial, but full-frontal-infuriation of the lurking real-power-politik of Iran, might be a tipping point. Of sorts.

I will pause now and suggest that the Obama administration might do well to “support” Ebadi’s candidacy in any way they want, but mostly to ensure she fills out the forms correctly and accurately, so that NO “administrative” errors can prevent her from running legally.

But if the powers that try hard to let it be, but almost always can’t buy me love, approve Ebadi’s permit to run, and if there is a Go-Go God and he is just, and just as jealous as he is advertised to be, the Brothers Gheib will most certainly lose their ill-gotten power within 2 years. That is how much trouble a Presidentress Ebadi can cause in that period of time.

Certainly Ebadi running, can cause the much needed conundrum for the God-Club-Elite who have had it relatively easy these past 33 years. Let the rabble pretend anyone can run for President of Iran. Cut the 5,000 down to 2 golden boys by means of washing out the linen through assorted sanitizing of “applicant irregularities”. Then offer up the Golden Gooz for the lottery with a last minute 2-fingered anointing by the Supreme Cheese Stuffed Crusty.

Proof they are getting lazy at it was the debacle of 2009. Someone forgot to tell the ballot counters that they didn’t actually have to count them, and the precious little bastards actually did, and even started using Excel and Powerpoint to release the cutest fake results you’ve ever seen.

To try and be serious for these last few lines. The Iranian election is a fake event. It is a lottery designed to create the illusion of choice for a people so starved for choice that they cannot see it as the lottery to pick who will kiss the boot and other assorted posterior locations of Ozatollah. I said I would try.

Given the entire process is hilarious, how funny would it really be if Shirin Jan actually threw her hat in the ring? OK, now I think I just stopped laughing.