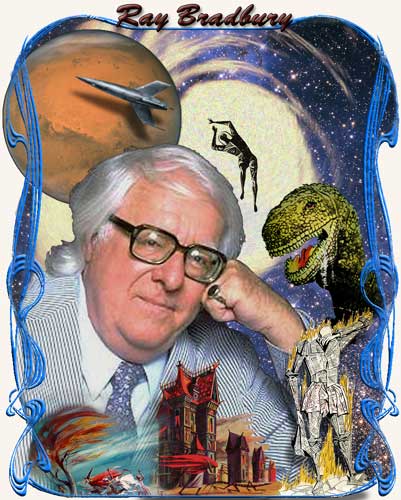 Author Ray Bradbury has died in Los Angeles at the age of 91. He authored more than a hundred novels includingFahrenheit 451 and Something Wicked This Way Comes. (Related News)

Day at Night with Ray Bradbury :

« BOOKS HAVE NOTHING TO SAY …

BURN THEM ALL MONTAG… »

Author Ray Bradbury has died in Los Angeles at the age of 91.

His daughter Alexandra confirmed that her father died on Tuesday night in Southern California. She did not have additional details.

Bradbury wrote hundreds of novels, short stories, plays and television and film scripts in a career dating back to the 1940s.

His most famous novels include Fahrenheit 451 and Something Wicked This Way Comes.

The writer’s grandson, Danny Karapetian, said: “He influenced so many artists, writers, teachers, scientists, and it’s always really touching and comforting to hear their stories.

“His legacy lives on in his monumental body of books, film, television and theatre, but more importantly, in the minds and hearts of anyone who read him, because to read him was to know him”.

The author was married to Marguerite McClure, who died in 2003. The couple had four daughters together.

Bradbury was born in Illinois, and as a teenager moved with his family to Los Angeles.

For three years after leaving school he earned a living selling newspapers, writing in his spare time.

From the early 1940s his short stories started to appear in magazines like Weird Tales, Astounding Science Fiction and Captain Future.

His first book, Dark Carnival, appeared in 1947, and three years later he began to establish his reputation with The Martian Chronicles, a collection of stories about materialistic Earthmen colonising and ruinously exploiting Mars.

His most celebrated novel, Fahrenheit 451, published in 1953, depicts a future society in which books are banned.

The story, which gets its title from the temperature at which paper spontaneously ignites, proved to be uncannily prophetic – the characters are addicted to television soap operas, while miniature headphones, known as “ear thimbles”, provide a constant stream of music and news.

A film version, directed by Francois Truffaut, was released in 1966.

Bradbury also wrote several works for film and television. He wrote the screenplay for John Huston’s film Moby Dick and scripts for many TV series, including Suspense, The Alfred Hitchcock Show and The Twilight Zone.

Bradbury was passionate about literature. In 2008, he said: “If you know how to read, you have a complete education about life, then you know how to vote within a democracy.