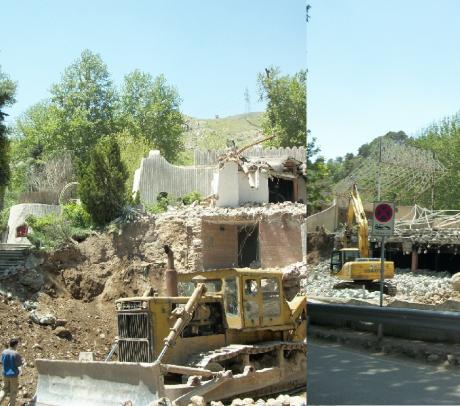 Couple years ago I wrote a blog entitled Shemraan Nights and posted a picture of the Darband Restaurant (then Hotel and Restaurant Diplomat) and reminisced with some friends about our memories of Darband.

I am sad to report that due to widening of the Darband’s road to make it a two way street, that mystical building along with Darband Hotel and other landmarks that may be full of memories for you are now gone.  The picture in this blog is two pics merged to one and I hope it comes out ledgible.

The building on the right is the now demolished Hotel Darband and the metal frame you see if the remnant of the old Kolbeh Disco which I’m told housed a big dance floor with those metal frame covering the dance floor.  I never went there but those of you who are few years older than me may know about Kolbeh, Darband Hotel, that building and memories.  The building on the left is the Darband Restaurant and you can see the remaining parts that was the trademark of that building, compare it to the other pic on the Shemraan Nights blog.

As I had mentioned in that blog I was very fond of that building in Darband and Restaurant with stucco sidings and it was always very mystical to me watching it from the back of my parents’ car as we drove and passed by it.  I wish I had visited it at least once last year.  Never thought it would be demolished.

Though extremely sad to see those buildings go, some of the locals and visitors were talking about the necessity of the road to be widened because Darband is so popular (extremely popular) that on weekends and summer nights there are literally thousands of cars and people who want to go there and the old one way road was not enough and people constantly would get into accidents and traffic jams.  I wish there was a better way to approach this and other ways to save those landmarks.  Others were saying this was Islamic Republic’s way of demolishing old memories of the Shah era.