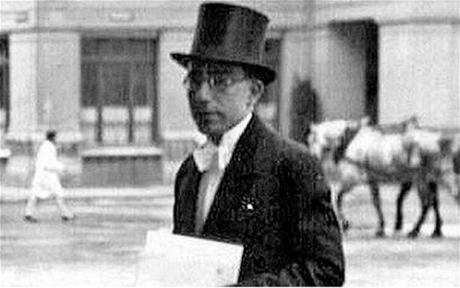 A new, exciting book on Iranian Jewry is making lower-tier headlines in Israel, the UK, France and even Turkey. Awareness of the work’s central figure, Abdol-Hossein Sardari, is traceable within English-language media since at least 2004 when he was recognized in a memorial by the Simon Wiesenthal Center, and he inspired a fictionalized TV drama in Iran in 2007. However, the recently debuted “In the Lion’s Shadow: The Iranian Schindler and His Homeland in the Second World War”, written by political scientist Fariborz Mokhtari, appears to be the first book-length work on Sardari published in English.

So what is the story of Abdol-Hossein Sardari? Author Mokhtari paints him as a principled socialite who enjoyed the finer things in life and threw lavish parties for the Nazi officials as neutral Iran’s consul in occupied Paris– making friends in the right places for calling in favors later. Many of these favors were requested by Sardari on behalf of Jewish friends: not only for the Iranian citizens who were his legitimate responsibility, but also for their non-Iranian spouses, friends and coworkers, who were often surreptitiously granted Iranian passports from Sardari’s stash of blank documents at the embassy.

But how did Iranian Jews escape Nazi harassment in France without fleeing back to their own country? Sardari sought to use the Nazis’ own racialist ideology against them, wholeheartedly embracing the Aryan-race identity for Iranians to staunchly argue that Iranian Jews were not “Jews by blood,” but rather Aryan Iranians who followed the “Mosaique religion” (ie, the religion of Moses). Thus, he maintained, Iranian Jews were not members of the ”European Jewish” race and should not be subject to Nazi Jewish policies.

Similar arguments were made regarding the Jews of Afghanistan and the Caucasus– these were not racially Jewish, but Aryans who had over the course of history converted to a Judaism-like religion while retaining otherwise Aryan social, cultural and linguistic traits. For example, Sardari insisted, Iranian Jews celebrated Iranian holidays like Norouz, spoke only Persian and no Hebrew (probably a slight exaggeration), had Persian names, and were in most ways indistinguishable from other Iranians.

The local Nazi officials were either convinced or confused (or both) but generally left the Iranian Jews alone as they attempted to consult academics and higher-ups in Germany for further instructions. In “In The Lion’s Shadow,” Mokhtari reproduces in full Sardari’s memos to the Nazis, detailing the rationale for his dramatic claims. Ultimately, many of them were skeptical and insisted that the category of “Mosaic Aryans” that Sardari had called “Djuguti” were in fact Jews and therefore subject to the Jewish policies. Eichmann, a major architect of the Holocaust, himself declared Sardari’s claims to be nothing more than another ”clever Jewish trick.”