Ayatollahs who issue verdicts on apostasy and execution fatwas should be put on trial, argues Banisadr 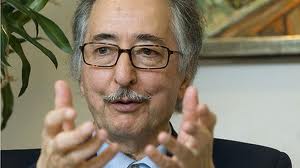 Iran’s former president Abolhassan Banisadr, along with a leading Islamic scholar, stated in a recent interview that religious authorities who issue verdicts on apostasy, and particularly the execution of “apostates,” should be put on trial.
This should be noted because the argument is a paradigm shift. He is not simply arguing that apostasy is not a crime – indeed, that would only be to state the obvious as there is no crime of belief in Islam. Instead, he goes much further to argue that since human rights are intrinsic in human beings, and as the right to life is one of the most important of these rights, then anyone who threatens or endangers this right – irrespective of her or his authority or social position – commits an infringement on this right and should be held legally accountable for doing so. In other words, he reclaims the power over life from religious authorities and locates it within a society that organizes its relationships on the basis of protecting and defending the human rights of all.
The basis for this argument is the model of laïcité, in which a state takes a neutral position on all belief systems in order to protect universal human rights rather that privileging particular groups, religious faiths or other systems of belief. In such a system, all people are equal before the law and should observe the rights of one another. Those whose rights are violated for any reason by other people can demand that those violating be tried for such offense. In this situation, the highest religious authority is entirely equal with all others, and can receive no special privileges or immunities. The only immunity one has comes from observing the rights and dignity of oneself and other people living in society.
This position is one more example of how Islamic fundamentalism and theocratic authority can be effectively challenged by developing understandings of Islam as a system of belief that is not only compatible with, but that is based on, the defence of freedom and human rights.
Here is the link to the interview, which is in Persian: http://banisadr.org/index.php/mosahebeh/soti/324-2…