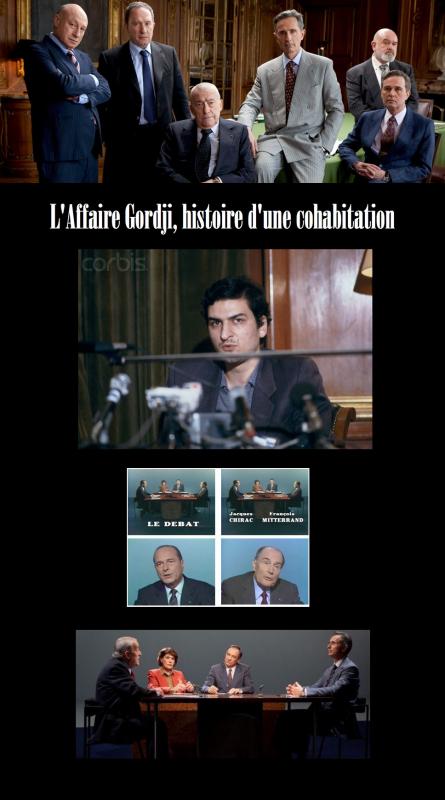 French TV drama tells the story of Wahid Gordji variously portrayed by others as the No. 2 man at the embassy, an adept businessman and a link to Iran’s secret service and lebanese groups attracted to Iran’s Islamic revolutionary government. The events took place amidst the French Coabitation during which Socialist President François Mitterand was sharing power with his right wing opponent Jacques Chirac as his Prime Minister. Gordji was to seek refuge at the Iranian Embassy in Paris and after a 5 month ordeal what was to become known as the « embassy war » ended with a swapping of Gordji in exchange for French hostages in Lebanon. Roger Auque and Jean-Louis Normandin were freed by a shadowy Shiite group, the Revolutionary Justice Organization, after 10 months and 20 months, respectively, in captivity. ( See Related Article)

NOTE : See Photos at the time of the affair of the Real life Wahid Gordji Here

Mitterand Vs Chirac in Presidential Debate 1988 :

A French court ordered the conditional release Tuesday of Ali Vakili Rad, the Iranian agent jailed for the 1991 assassination of Shapour Bakhtiar, a former Iranian Prime Minister during the Shahs era who had fled to France.

PARIS — France and Iran ended their five-month “embassy war” yesterday by exchanging a French diplomat in Tehran for an envoy accused of terrorism, who had holed up in the Iranian Embassy in Paris. The swap was made three days after pro-Iranian captors in Lebanon freed two Frenchmen.

Officials called the events a coordinated effort to mend a rift between the two nations, but warned that diplomatic ties would not be restored until Iran helped win freedom for the remaining French hostages in Lebanon.

At the Karachi airport in Pakistan, Iran traded French consul Paul Torri for Wahid Gordji, an interpreter at the Iranian Embassy in Paris, who was accused of involvement in last year’s terrorist bombings in the French capital.

They were frisked on the airport runway and released to officials of their countries. Each flew home in the plane that had delivered the other.

Gordji was questioned briefly about the bombings Sunday by a French magistrate investigating the cases and was freed without being charged. He then proceeded to Paris’ Orly Airport, where a plane was waiting to take him out of the country.

At the same time, Iranian authorities were questioning Torri in Tehran about his alleged involvement in espionage. He never was formally charged with any wrongdoing.

Yesterday, Iranian authorities lifted their siege of the French Embassy in Tehran, allowing the eight remaining diplomats there free movement for the first time since the “embassy war” began June 30.

On Sunday night, France lifted its security cordon around the Iranian Embassy once Gordji was released, and the 40 Iranians there were free to leave.

The developments were part of what Prime Minister Jacques Chirac called a ”detente in Franco-Iranian relations” spurred by Iranian help in persuading pro-Iranian kidnappers to free two French hostages in Beirut on Friday.

A government spokesman said officials were unraveling other obstacles to a resumption in diplomatic ties, severed since July 17 over Gordji’s refusal to appear for questioning, leading to blockades of the respective embassies. But he said the freedom of the last three hostages in Lebanon was the final hurdle.

In Iran, Tehran Radio said, “France’s recent action is considered positive.” But it said the French supply of arms to Iran’s enemy in the Persian Gulf War, Iraq, “will have a decisive, negative effect on the improving trend in bilateral relations.”

On Friday, Frenchmen Roger Auque and Jean-Louis Normandin were freed by a shadowy Shiite group, the Revolutionary Justice Organization, after 10 months and 20 months, respectively, in captivity.

Also yesterday, the brother of U.S. hostage Joseph James Cicippio of Norristown, Pa., said that his family was trying to get more information about reports that his younger brother was suffering in captivity.

Thomas J. Cicippio, 64, of Norristown, said he had contacted the French Embassy in Washington to find out about the welfare of Joseph, 57, the acting controller of the American University of Beirut, who was abducted by gunmen Sept. 12, 1986.

“I would like to see if they can give us more information,” said Thomas Cicippio, a retired postal worker, from his home on East Roberts Street.

He hoped to be able to talk with Auque, 31, who said after being released Friday by the Revolutionary Justice Organization in Lebanon that he had been told that Joseph J. Cicippio was suffering “very much.”

ESCAPE FROM TEHRAN: First Glimpse at Ben Affleck in “Argo”

EURODIF: Georges Besse’s assassination, The Shah, The Bomb & the Revolution