Saudi Crown Prince Nayef, next in line to throne, dies “outside the kingdom” 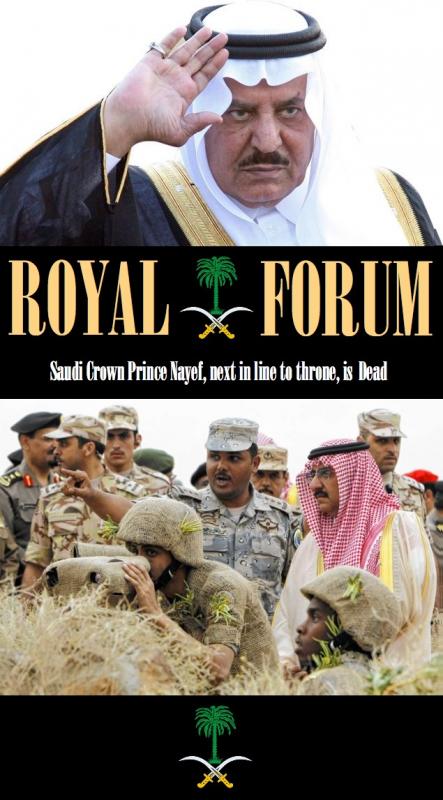 Saudi Arabia’s Crown Prince Nayef bin Abdulaziz al-Saud has died in Geneva, Saudi state television said on Saturday, citing a royal court statement. Unlike in Former Persian or Current European monarchies (aside from Sweden and UK most recently) , the line of succession in Saudi Arabia does not move directly from father to eldest son.

It moves down a line of brothers born to the kingdom’s founder Ibn Saud, who died in 1953.  Prince Salman bin Abdul Aziz Al Saud, the defence minister, is expected to be named crown prince. (See Related News)

– Born in 1934, the son of King Abdul Aziz and his favourite wife, Hassa bint Ahmed al-Sudairi

– Became governor of Riyadh in 1953 and then deputy interior minister

– Chosen as crown prince in October 2011

Crown Prince Sultan bin Abdulaziz al-Saud was buried in Riyadh on Tuesday.  Prince Sultan died in a New York hospital from colon cancer on Saturday.  His relatives looked on as he was laid to rest.  He served as defence minister and oversaw a spending spree that made the kingdom once of the world’s biggest arms buyers.  Observers expect King Abdullah to name Interior Minister Prince Nayef as the new heir to the throne of the world’s top oil exporter.  Officials from across the Arab and Islamic worlds came to pay their respects.

ALREADY TO OLD TO RULE ONE DAY ? …

Prince Nayef, who was also deputy prime minister and interior minister, had left the country for a holiday and medical tests late last month.

UK PM David Cameron praised the prince’s “dedication” and US President Barack Obama focused on his role in fighting terrorism.

The succession in Saudi Arabia still passes among the sons of former King Abdul Aziz ibn Saud, who established the modern kingdom during his reign from 1932 to 1953. So far, five brothers have become kings and about 20 are still alive.

King Abdullah, who is 88 years old, had a back operation last year.

Next in line is expected to be Prince Nayef’s 76-year-old brother, Prince Salman, who was appointed defence minister in November after spending five decades as governor of Riyadh.

The new crown prince must be approved by the Allegiance Council, a 34-strong assembly of King Abdul Aziz’s sons and some of his grandchildren.

A statement from King Abdullah published by the official SPA news agency, said Prince Nayef had died on Saturday “outside the kingdom” and would be buried on Sunday after Maghreb (sunset) prayers in Mecca.

Unconfirmed reports said Prince Nayef had been receiving medical treatment since May at a hospital in the Swiss city of Geneva.

On 3 June, the deputy interior minister said the prince, who was 77 or 78, was in good health and would return “soon”.

The prince was a member of the influential group known in Saudi Arabia as the “Sudairi Seven”, which was made up of the sons born to King Abdul Aziz and his favourite wife, Hassa bint Ahmed al-Sudairi.

The kingdom’s interior minister since 1975, he led the crackdown on al-Qaeda’s offshoot in the country after 11 September 2001.

Personally committed to maintaining Saudi Arabia’s conservative traditions based on the Wahhabi doctrine of Islam, he was seen to be more conservative than King Abdullah.

But in 2001, Prince Nayef supported a move to issue women with their own identity cards, a decision which gave women more freedom in many financial and legal transactions, says the BBC’s Shaimaa Khalil in Cairo.

He adopted a more stern tone to the Arab Spring, denying claims that it could move to Saudi Arabia, our correspondent adds.