GOD SAVE ANGLOPHILE: Tribute to another Monarchist Silenced in the name of “Liberal Democracy” 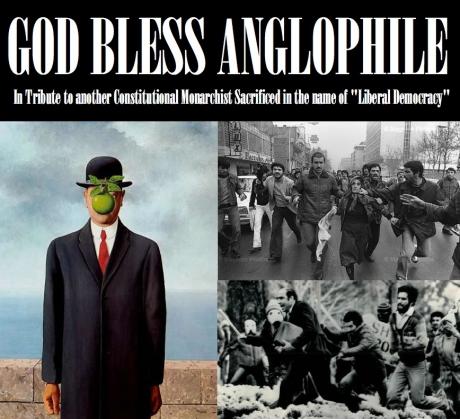 I did notice anglophile may have been unfairly obnoxious with Redwine ( whom I appreciate for he has always been a gentleman in all circumstances) on the following blog posted by tapesh (Here). But I sincerely hope anglophile won’t be banned from Iranian.com too long …

But more importantly that his pride won’t get into the way from coming back.

I have been and always will be against banning people for whatever reason regardless of whether or not those people shared or not my views because ultimately writing is often the only way to liberate our frustrations be it collectively or individually. We do it with Words, creativity and our imagination for what it is Worth and Not Bullits and Chomags to get our ideas through.

Although I am truly begining to seriously doubt the sincerity in the motto of this website : « Nothing is Sacred »

Cause apparently being Politically Correct (which to me is far more « vulgar » and an insult to one’s intelligence than the mere use of profanity in a conversation) seems to be far more tolerated not to say encouraged than speaking the truth or even speaking up against hypocrisy.

I barely if never Flag Anyone but then I can’t help but notice that IC’s Admin accepts Flags for instance against the slightest sarcasm which is deemed OK if the person being flagged is a Monarchist or monarchist sympathizer but when it comes to any Obnoxious Jomhurykhah calling you a « Nokar », a « British Pig » a « Traitor » that is deemed OK ?

I mean what the devil are you Jomhurykhah Editors of Iranian.Com so worried about ? A COUP ?

I mean How many people do you see on this website who genuinely defend the Monarchy let alone a Constitutionalist one other than me and most recently anglophile ?

What Threat are we to you or your constituency anyway ? …

Or is this YOUR Personal EYE RANIAN concept of « Liberal Democracy » ?

Not only has anglophile added a great deal in elevating many debates in relation to history and politics and he does it with a unique sense of humor which may appear at times misunderstood.

Everyone has a given online personality which they wish to display on this website and in other public forums and which may or may not correspond to their real persona.

So What ? Does that deserve a biased Punishment and Double Standards ?

Oh but of course I am sure you will come up with some excuse that you are merely applying the Editorial Policies regarding harrassment and profanity !

I am saddened by Anglophile’s departure from the pages and contributions on this website and I hope that it is not a permanant absence which will drive him away for good.

So why should he be punished and not those who can’t put up with his dry yet funny humor ? …

And a Personal Note to you Anglophile Jan:

I sincerely Hope to see you around soon …

It is true that writing on Iranian.com can at times appear as something of a constant mind game where the frontier between what is tolerated and what is not is not always clear.

Maybe expressing yourself with your real name like I do could help but having been in a similar situation I know for good that even that is not always a guarantee but at least that way no one can blame you of not being accountable.

If Not then you will be missed…

An Un Apologetic Monarchist (Constitutional Or Not)

PS: Anglophile Jan If you wish to contact me on a personal note feel free to email me @ : darius_film@yahoo.com

I’d love to meet you in Person be it in London or Paris someday. Vive L’Entente Cordiale !