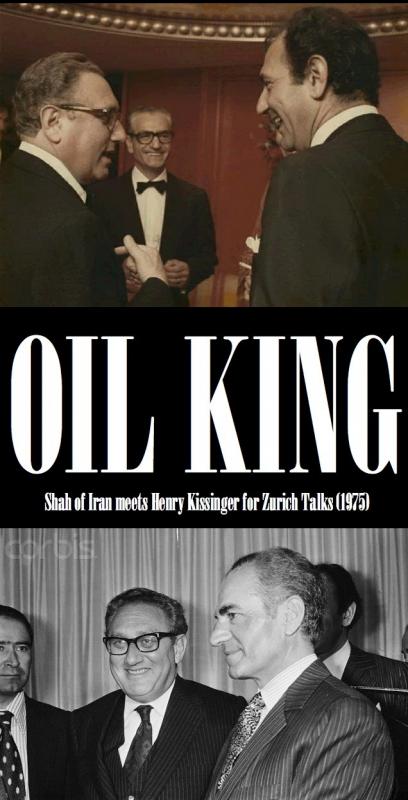 Mohammed Reza Shah Pahlavi, the Shah of Iran, meets US Secretary of State, Henry Kissinger in Zurich amid tight security for a summit meeting that lasted 3h40. In conclusion, the Shah confirmed that his country was not ready to implement an oil embargo in case of conflict in the Middle East. February 18, 1975 (Source: persianrealm.com)

Conversations host Harry Kreisler welcomes author Andrew Scott Cooper to discuss his new book “The Oil Kings.” Focusing on the geopolitics of the Middle East in the 1970’s, the study centers on the complex relationship between Nixon, Kissinger and the Shah of Iran. Relying on recently declassified documents, Cooper describes the international environment of the period and the implications of the Nixon doctrine for the Shah’s foreign policy. Revealing the contradiction between the Shah’s dependence on the rise of oil prices and the need to fund his new military role, Cooper explains how this contradiction resulted in the Shah’s downfall and the implosion of Iran. He demonstrates the interplay between the collapse of the relationship between Iran and the U.S. and the emergence of Saudi Arabia as the guarantor of price and supply in the oil market and America’s most important ally in the Persian Gulf. Series: “Conversations with History” [11/2011] [Public Affairs] [Show ID: 22929]

How Nixon Courted the Shah  by Joan Oleck (The National)