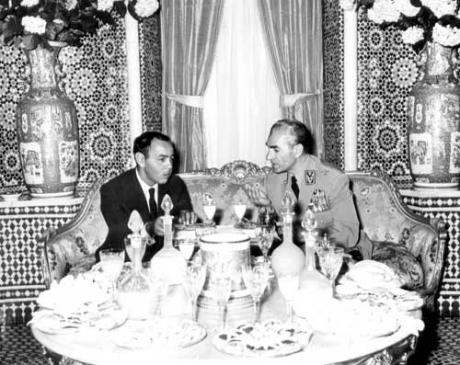 Reception given by Iranian Embassy in Rabat for King Hassan and visiting Shah. The Shah can be seen hugging the current King Muhammed VI who was a child heir to the throne. (Source: persianrealm.com)

Description of Above Footage:

In a rare french interview King Hassan II uses a mumbo jumbo argument to explain why in the muslim world one cannot separate Religion and Politics and that all heads of state’s in the Arabo Muslim world don’t separate both entities whether they are Monarchs or Presidents. He then says that his « friend » the Late Shah fell because he did not understand this fundamental islamic requirement and dared introduce secularist policies in his country. He then adds that in Morocco you do not have Clergies as in Iran.

Yet Milani actually claims in his best selling biography « The Shah » that in Morocco the Royal Slogan is in the following order: « God, Country, King »

Yet the Iranian Slogan is very much like in Great Britain : GOD SAVE THE QUEEN / OR KING where the Monarch is above her Subjects be it symbolically but she is also the Guardian of all Faiths which she is supposed to protect their followers but the British Monarch is also the head of the Anglican Church which defines the State Religion in the UK.

In the above interview King Hassan however offers a very different reason why his absolute rule cannot be questioned and that is that he himself embodies Religion and is above the Clergy since he is the direct descendent of the Prophet.

David Frost Interviews the Shah at the Height of Power (1974):

“We know better than anyone the shortcomings of our generation. We lack sufficiently qualified personals and executives in various technical branches of the industry. We also lack sufficient technical schools to train them in. In addition unfortunately each time a new technical school is created, the teachers are immediately tempted to over estimate the value of the diplomas delivered to the students in the eye of the university establishment. Hence an inadequacy between the training required and the diploma delivered.” say’s the Shah.

“The result is that each time someone get’s a diploma he thinks that entitles him or her not to work and seek an easy way out. That is Not good.” He Continues.

“On days of religious mournings, given the facilities in a city like this one (exact location ? ), you stop working while your own wives and daughters have to finish the job. That is not the genuine message of Islam, Our White Revolution is precisely trying to translate in practice that original message of the prophet. But there are people who are distorting that genuine message with an explicit aim to pervert it and manipulate you through superstition.” say’s he.